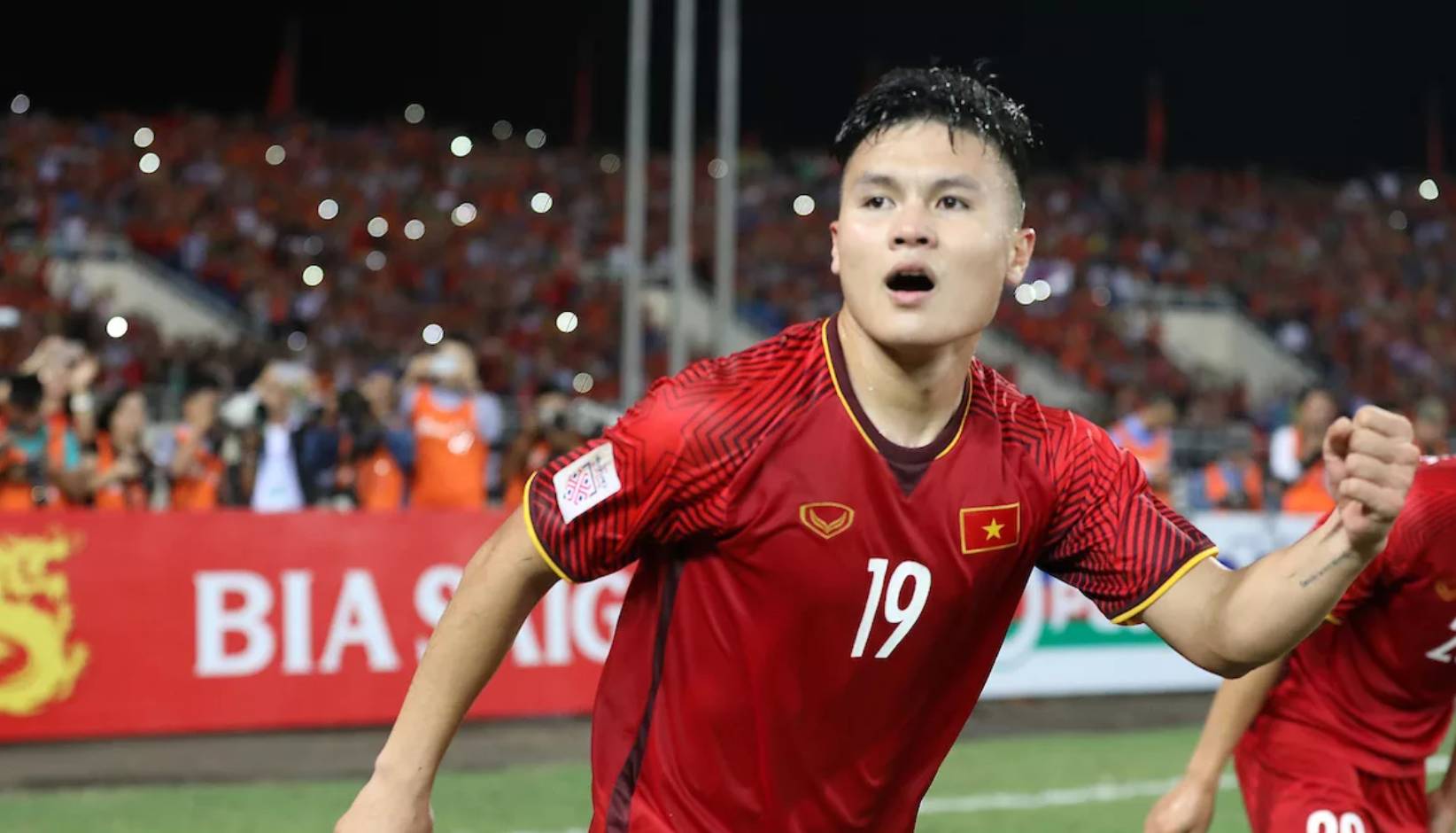 The media, more recently, has been tagging exciting youth prospects as the ‘new Ronaldo’ or ‘new Kaka’ to draw readers’ attention. Coining the top national players as the ‘English Messi’ or, in this case, the ‘Vietnamese Messi’ engraves curiosity. Experts perceive these talents to have technical potential, the media grants them more coverage and, most importantly, the public enjoys the moments of brilliance that these players exhibit. This was the case of the ‘Vietnamese Messi’ Nguyen Quang Hai when he pulled off the sublime ‘Rainbow in the Snow’ in the 2018 AFC U-23 Asian Cup final. His talent was recognised, leading him to sign for Pau FC, a Ligue 2 team.

A fruitful 2018 and career breakthrough

In the AFC U-23 Championship, that was in January 2018, Quang Hai scored five goals. In the opening fixture, he showcased his finesse with a long-range curved goal against South Korea. In the second group stage game, following a series of attempts by Vietnam, he decisively thumped in the only goal from outside the penalty box in the match against Australia.

Vietnam reached the knockouts following a goalless draw against Syria. In the semi-final, Quang Hai equalised twice. First by capitalising on a second of hesitation from the Qatari defenders and second through a showcase of quality. Smooth touch to receive the loose ball, a fake shot to eliminate the blockages and a magnificent curl to send the match to extra-time and, subsequently, penalties. In the final, the midfielder equalised just before the first half concluded with the freekick dubbed ‘Rainbow in the Snow’, one that rocked the city of Changzhou and still echoes around Vietnam to this day.

Running from mid-August to the first day of September, the Vietnamese Olympic football squad had an even better run in the group stage. Despite being drawn with Japan, Pakistan and Nepal, Vietnam topped the group with three wins. Quang Hai opened the scoring to inspire a 3-0 win against Pakistan and scored the only goal to give Vietnam the win against Japan. In the knockout stages, Vietnam beat Bahrain and Syria before falling to South Korea in the semi-final. As the tournament concluded, Quang Hai was named as the Team of the Tournament alongside two of his teammates.

Quang Hai’s final action of the year in the national team’s colours was at the 2018 AFF Cup. He scored against Laos, Cambodia and the Philippines to help Vietnam achieve an invincible campaign and the title. The attacking midfielder was given the title, this time, not only to the Team of the Tournament but also the Most Valuable Player.

In the domestic league that year, Quang Hai played 24 out of 26 possible matches for Hanoi FC and scored nine goals, admirable number for an attacking midfielder. His team went on to secure the title and Hai was in the Team of the Season. Throughout 2018, Quang Hai had 57 appearances, totalling an astounding 4,414 minutes.

Quang caliber, delicacy and what he offers Pau FC

French males have an average height of 1,78m and an average weight of 82,6kg but an average Vietnamese male is 1,68m tall and weighs 61.2kg, according to studies. While there might be different parameters between the general population and professional athletes, there can be grounds to believe in the differences in the physicality of Vietnamese versus French players. In Quang Hai’s case, despite his modest yet average height of 1,68m (roughly 5’5”), he weighs around 65 kgs. This would compensate for not being physically imposing but being physically tough.

At Hanoi FC, he played as the left-sided midfielder in a 4-3-3 formation. This allowed him room to create and finesse his skills. With head coach Didier Tholot’s preference for a 4-2-3-1, the “Vietnamese Messi” may fit in as a number 10 behind the striker. However, the contract renewal of Steeve Beusnard, a predominant number 10 in Tholot’s set-up, will be a competition to Quang Hai.

Like the football legend, Quang Hai also possesses prodigious technical and mental skills. Ibou Kebe, Quang Hai’s former teammate, complimented him on his ball control, decision-making and versatility. All these traits were a testimony in the goals he scored for the national team in 2018. His ability to bend the ball with his left foot and his dribbling skills will pose intriguing fluidity to Pau FC’s attack for the upcoming seasons.

The effects that Quang Hai brings to Pau FC expand into an incremental part of our lives: social media. Much like the previous case of STVV, Pau FC’s social media retained a massive influx of traffic since the signing of the ‘Vietnamese Messi’, as Vietnamese people follow and support the actions of their beloved player in Europe. This would help the team gain a potential foothold in the market and vastly increase their commercial capabilities.

Arriving in France very early in the pre-season, Quang Hai will have ample time to settle in and prove himself worthy of a spot come the regular Ligue 2 season.