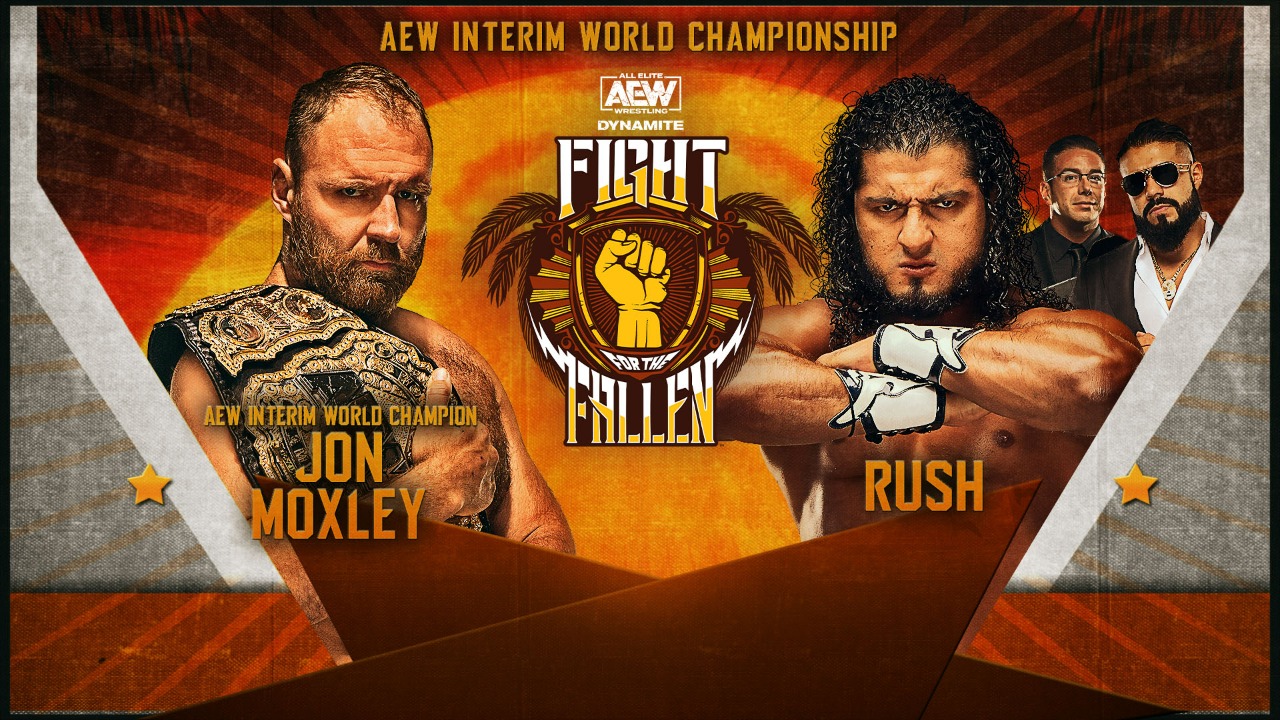 Last week's AEW Dynamite ticked all the boxes that a pro-wrestling fan often desires. From captivating back-and-forth promo segments to world-class action within the squared circle- AEW had everything. Furthermore, to top it all off, two shocking moments caught the audience off guard as nobody saw the swerves incoming. Don't worry if you missed any action from last week because we have you covered!


Match of the Night | Jon Moxley vs Rush


The theme of this week's Dynamite had the members of the Jericho Appreciation Society placing the Blackpool Combat Club in their cross-hairs. It all started after the conclusion of the former ROH World Champion Rush having his shot at the interim AEW World Champion Jon Moxley.


El Toro Blanco ambushed Moxley even before the bell rang. It was pandemonium right from the get-go. It didn't take long for the Champion to bleed out from Rush's offence. Rush did not show mercy as he introduced a steel chair and AV cables, all for projecting his nasty side. Moxley had to get his dirty side in to save himself and to even the odds. There was interference to help Rush out, as you'd expect.


Jose's interference led to Andrade shoving Moxley. The arrival of the Lucha Bros took care of the menace immediately. Near falls and rollups did not help either, as both men headed for the conclusion. Moxley earned the hard-fought victory with a Death Rider and the bulldog choke. The opener between two alphas was nothing short of a pay-per-view level match and thus rightfully deserves to be our match of the night.


After the AEW Champion got his way, his celebration was rudely cut short by the leader of the JAS, Chris Jericho himself. The latter demanded his long-due title rematch for the "Quake By The Lake" event in Minneapolis next week. Moxley did not turn down the challenge but welcomed it with open arms. The Champion demanded one condition- to bring out the "Lionheart" rather than the more secondary incarnations of Jericho we have seen lately.


Surprise of the Night | Bryan Danielson vs Daniel Garcia


The hugely anticipated comeback of Bryan Danielson's match this Wednesday was the talk of the town. His last match was the Anarchy in the Arena bout at Double or Nothing 2022 against the Jericho Appreciation Society.


As fate would have it, he had to face a member of the JAS upon his return to action. The fans expected the veteran to kick Daniel Garcia's head in but got what they did not expect- the opposite.

Danielson got his aggressive offence in from the get-go, and Garcia had to hold on to his defensive manoeuvres. The action on our televisions turned more violent than expected, as Danielson suffered a head laceration right in the beginning.


With dropkicks and trademark kicks to the chest, Danielson tore the house down with cheers arriving from his ardent supporters. The BCC member looked in firm control. Before Bryan could finish his opponent off, he caught his foot in the ringside banner, and at this precise moment, Garcia regained his senses and chalked out his plans to perfection.


Garcia took the advantage to deliver a spike piledriver. He did not let any moment slip and applied a Sharpshooter, with added torque, until The American Dragon passed out. An unlikely victor emerged from this David versus Goliath contest, and Garcia was the man of the hour.

Some might argue that the most significant victory of Garcia's career was aided by the man hiding under the ring, which revealed to be Jake Hager. It was he, who trapped Bryan's leg, to create a window of opportunity for his teammate.


Moment of the Night | Jungle Boy called out Christian Cage


The fans were waiting in anticipation when Jungle Boy finally came out to hit back at his former friend and mentor, Christian Cage. After weeks of continued low-blowing insults from Cage had elevated this rivalry beyond the constraints of wresting- it had gotten personal. Jungle Boy returned to speak for the first time in months with Luchasaurus by his side and cut a scathing promo for all of us to enjoy.


Like his former mentor, Jungle Boy blurred the lines and extended beyond his limit by pushing Christian Cage's buttons early on by bringing his personal life's miseries into the mix. The 25-year-old emphasised the veteran running away from him last week, proving that Cage got caught in a cowardly act.


Christian Cage didn't sit back and made his presence known via the titantron from the backstage area. He mentioned that Luchasaurus had lost his once-in-a-lifetime opportunity of becoming a main eventer by disassociating with him.


Dismissing himself as a coward, Cage proclaimed that he escaped only to ensure that he controlled his actions. Because the next time they face off, Cage will make sure to put Jungle Boy in a body bag. This rivalry has reached its tipping point, and we can't wait to see what unfolds next!


Star of the Night | Hook


Hook has emerged as an absolute fan favourite in a relatively short amount of time. It was an ideal time for him to earn a strap around his waist, and what better way to do that than to win the same title that his father, Taz, made relevant and prestigious.

Though it was an impromptu match, Hook made sure to surf his momentum as he had been doing for weeks. The former FTW Champion Ricky Starks looked like a star as he put his title on the line for back-to-back matches, and Hook capitalised on his former stablemate's arrogance.


By winning the FTW title, Hook can now elevate his status in the roster by a notch. It will be interesting to see him defend not just another title but his family's legacy in AEW.


The Shock of the Night | Powerhouse Hobbs turned on Ricky Starks


Team Taz had an unlikely fallout this week. It shocked us as much as anybody would expect. Ricky Starks did not have an ideal night by any stretch of the imagination. He made things much more challenging for himself when he wrote his name for a back-to-back title defence.


While Danhausen didn't prove too much of a challenge, Hook did. Unable to extinguish what his ego started in the first place, it was only a matter of time before Starks realised the tough spot he put himself in.


After losing the title, Ricky poured his heart out in the centre of the ring. It was an emotional moment that earned the audience's sympathy. "My goddamn time is now!" Starks said in the post-match promo, drawing an enormous babyface pop. When Powerhouse Hobbs wiped his teammate out with a sudden clothesline, everyone was caught off-guard.


Is this the end of Team Taz? What's next for both of them? We will find out this week.