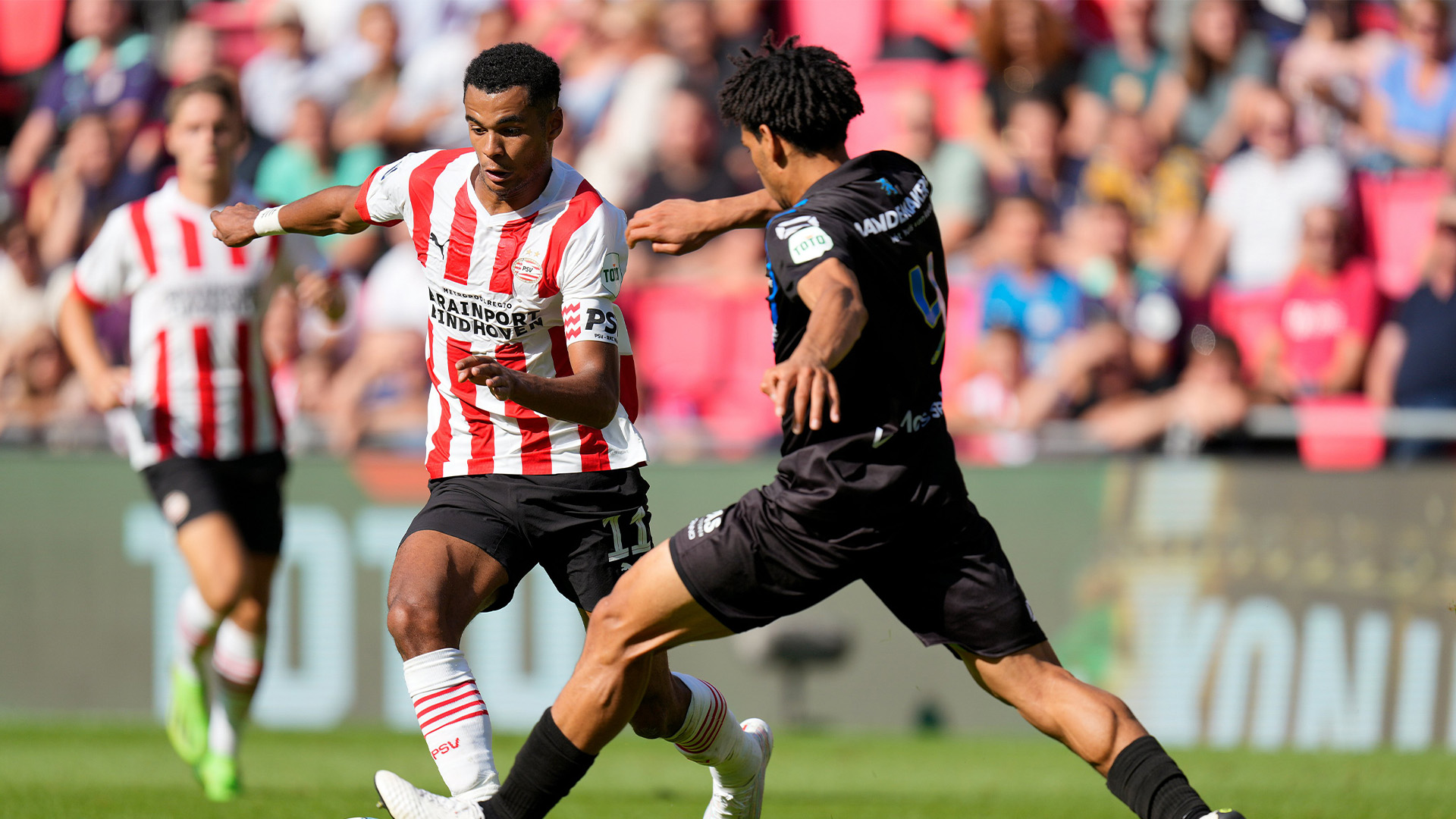 PSV came into the game as strong favourites, with the odds against the visitors from the off. The hosts had won four out of their first five fixtures this season, whereas RKC had only taken all three points on one occasion, drawing three and losing one in their remaining games.

Manager, Ruud Van Nistelrooy, shifted from a 4-3-3 to a 4-2-3-1 after his side fell to defeat at Twente in their last domestic match. The change in formation saw Xavi Simons drop back from a striker role to more of a ten role, in which he would link up with striker Anwar El Ghazi to create a threat offensively.

The visitors cruised to a 5-2 victory in their last outing, so manager, Joseph Oosting, did not change his side’s formation, sticking with a 5-3-2 in an attempt to nullify the wide threat that PSV possesses. Two changes were made that saw Florian Jozefzoon and Iliass Bel Hassani replaced by Julen Lobete and Saïd Bakari.

After only three minutes of play, PSV's El Ghazi received the game's opening opportunity. The forward got into a great position and looked certain to tap in from close range after a great delivery was whipped in following a foul on Gakpo. The winger sent a dangerous ball that fell to El Ghazi, who misjudged the ball and could not hit the target.

The ball was in the back of the net in the 11th minute, but the scorer, Ismael Saibari, was well offside, and the goal was disallowed. The midfielder nodded in from inside the six-yard box but had not timed his run well enough.

Saibari almost had his name on the scoresheet, but his long-range effort was met by the palms of Etienne Vaessen in the RKC net. The 21-year-old skipped past the challenge of Dario Van den Buijs to drive at the heart of the RKC defence. After cutting back to free up space after pressure from Vurnon Anita, the youngster fired a shot goalward that was turned away for a corner.

Great play from the visitors saw them register their first shot on target in the 27th minute. The front free linked up expertly to put Pelle Clement in a shooting position. The attacking midfielder fired, but Walter Daniel Bentez stopped his strong shot to preserve the score tied.

PSV immediately responded to this and almost broke the deadlock only two minutes later. Xavi Simons dispossessed Julian Lelieveld, setting him through on goal. Simons has had an exceptional start to the campaign, and in the form, he is in, it seemed definite that he would score. The 19-year-old rushed for a goal but only managed a centre stop from Vaessen.

Gakpo almost curled in a stunning free-kick in the 38th minute but saw his strike rebound off the crossbar. The winger lined up his shot and curled the ball elegantly, inches away from perfectly dipping under the crossbar. It evaded the diving Vaessen but could not break the deadlock.

The winger could not believe his misfortune four minutes after, as he hit the woodwork again! Xavi Simons cleverly backheeled the ball to the advancing Gakpo, who had the ball at his feet with room for a shot. The youngster sent the ‘keeper the wrong way, but his low shot deflected off the post and came back into play.

PSV had controlled the first half, but their inability to score saw them enter the tunnel with RKC tied at 0-0 at the break.

Three minutes after the interval, PSV had breached the RKC backline and were in on goal. A long ball over the top from Joey Veerman put Saibari through, but the midfielder rushed his strike and sent the ball wide of the post.

In the 68th minute, the hosts hit the woodwork for the third time. A corner was launched into the box that reached the back post. Erick Gutiérrez sent the ball back across the face of the goal, where substitute, Guus Til, was waiting. The Dutchman leapt high but could only divert his header onto the crossbar. It was another PSV chance squandered, and time was running out.

Gutiérrez tested his luck from afar and came close only two minutes after the prior chance. The Mexican drove his shot just wide of the target. With twenty minutes to go, it was still 0-0, much to the delight of the travelling fans.

After Clement got the ball back deep inside the PSV half, Bentez was called upon to make a save in the 73rd minute. He tipped over a curling effort. Despite so much action, neither side could make the breakthrough, and it headed towards a goalless draw.

The ninety minutes were up, but the fourth official added seven more. The length of time was cheered by the home fans, who were still hopeful of making their dominance pay. In the third minute of added time, the referee pointed to the spot after Xavi Simons went down clutching his face. The youngster had been caught by the boot of substitute Hans Mulder, who made contact with Simons when attempting to clear the ball from the danger area.

A brawl broke out when ‘keeper, Vaessen, pulled the shirt of Simons, who was still down on the floor. The ex-PSG prodigy sprung up and reacted to the shot-stopper. Simons was furious, and players from both sides gathered around to defend their teammates and break up the dispute.

The box was cleared, and Cody Gakpo stood over the ball from twelve yards out. Great responsibility fell on the youngster’s shoulders but he kept calm and finally opened the scoring. It was a precise penalty, and it had to be. Vaessen guessed correctly and dived the same way that Gakpo shot. However, the shot rustled the back of the net and sent the home fans into pandemonium.

The referee blew his whistle, and the points belonged to PSV. It was a sigh of relief from Van Nistelrooy, who had seen his side dominate but fail to score multiple clearcut chances.