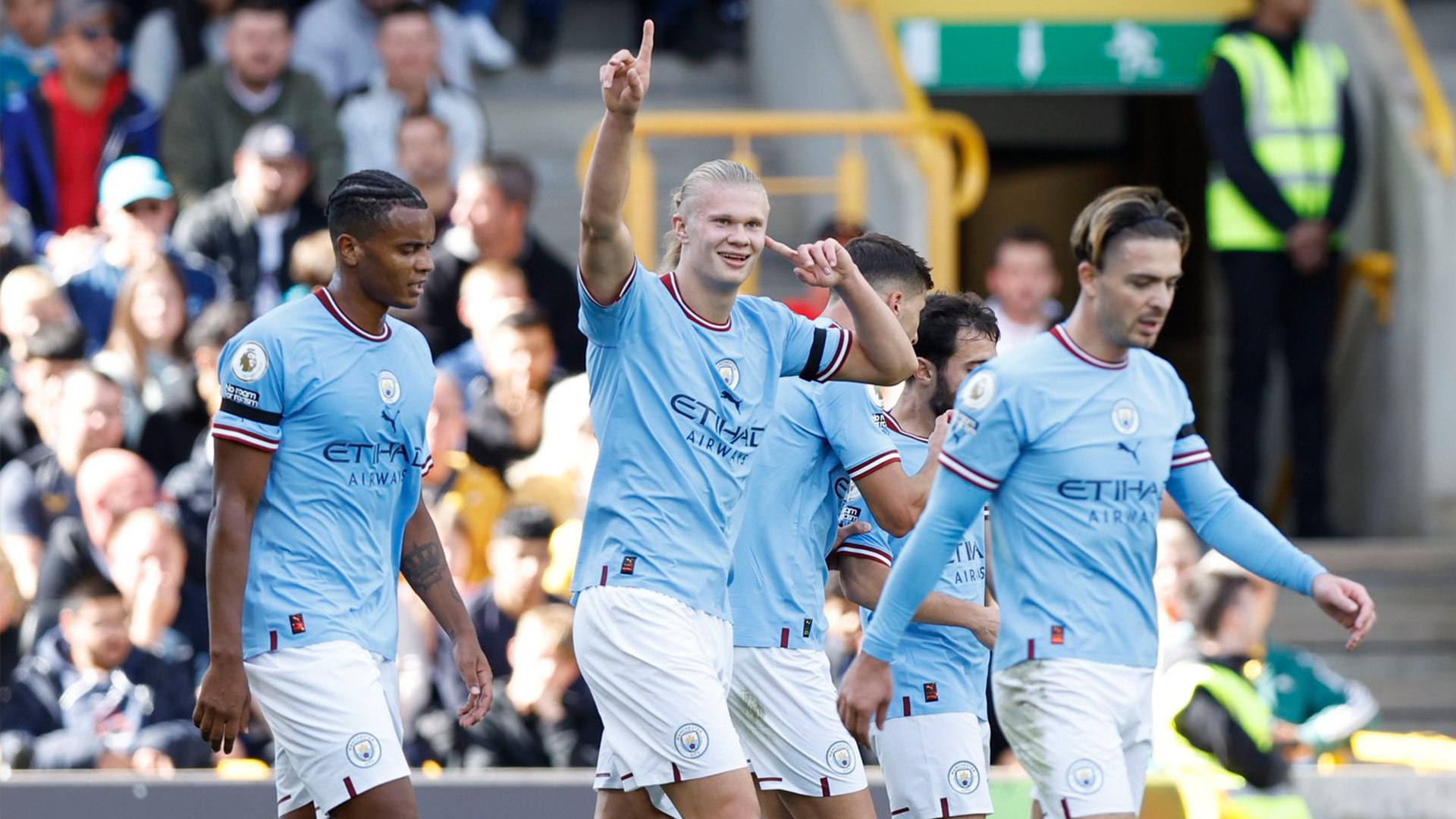 EPL Review: Haaland at it again, A sigh of relief for Gerrard, and Chaos at the City Ground


Matchday seven delivered a host of ties that saw Nottingham Forest’s struggles continue, Manchester City extends their unbeaten run, Newcastle held against Bournemouth, and Aston Villa edge Southampton. Before kick-off, a fitting tribute was paid to commemorate the life of Queen Elizabeth II, with a minute's silence and the updated national anthem ringing around the grounds.

Manchester City breezed past the ten men of Wolves at the Molyneux to continue their title charge. Erling Haaland extended his unbelievable form this season as he was on the scoresheet again to score his 11th after only seven games.

Jack Grealish opened the scoring to finish a great team move from the Blues. Phil Foden was in possession on the right wing and produced a sublime backheel to the advancing Kevin De Bruyne. The Belgian wrapped his boot around the ball and whipped in an inviting cross that was met by the foot of Grealish, who beat Jonny to the ball to give City the advantage after only one minute was on the clock. A quarter of an hour later, in the 16th minute, Haaland doubled the visitors’ tally with a low strike from outside the area.

The Norwegian was played in by Bernardo Silva, leaving City with a two-on-two attack. The striker had a lot to do but fiercely drove at the Wolves' defence and released an inch-perfect strike that sailed into the bottom left corner. The best defence in the league had been breached, and things went from bad to worse in the 33rd minute when Nathan Collins was dismissed for a high challenge on Grealish. The centre-back was reckless and was shown a straight red after his studs connected with the winger’s groin.

The second half brought more City dominance as the Sky Blues claimed all three points. Haaland almost grabbed his twelfth of the season but was denied by the palms of Jose Sa, who got down well to keep the score at 2-0. However, he could not stop Foden in the 69th minute as the Englishman flicked the ball into the far corner. Haaland created space for De Bruyne on the right flank. The midfielder produced another teasing ball into the box, and Foden delicately flicked the ball into the bottom left corner of the net. Another dominant display saw Manchester City grab three goals and three points.

Bournemouth started the game positively and should have broken the deadlock through a new signing, Marcus Tavernier. The 23-year-old saw his looping header fly wide of the post, marking a real missed opportunity for the Cherries as Nick Pope was off his line. Newcastle was awarded a free-kick in range of the goal. Kieran Trippier stepped up but was unlucky as his curling strike rebounded off the post. The Magpies then hit the post again only minutes later. After a corner was played, the ball fell to Joelinton, who, from a tight angle, shot at goal, but saw his effort cannon off the woodwork. The Brazilian almost opened the scoring again but was denied by Neto in the Bournemouth goal. The ‘keeper pushed away Joelinton’s effort and was called into action only seconds later when he was forced to palm away a long-range Ryan Fraser strike.

After a goalless first half, the deadlock was finally broken in the 62nd minute when Philip Billing diverted the ball into the back of the net to give Bournemouth a surprise lead. Newcastle had dominated but was made to pay for their squandered opportunities after the interval. Jordan Zemura lifted the ball into the danger area, where Billing got the all-important touch to send it past Pope. The hosts responded immediately and were level five minutes later. They were awarded a penalty after VAR found that Jefferson Lerma handled the ball in the box. Alexander Isak converted from the spot to claim a point for Eddie Howe’s side.

Nottingham Forest hosted Fulham in a clash of two teams that were promoted last campaign. Taiwo Awoniyi nodded the hosts in front in the 11th minute after the ball fell in his path from a corner. Ryan Yates rose highest but saw his header travelling towards the far post, but the striker reacted rapidly to send the ball into the back of the net.

After a quiet first half, the game came to life following the interval. In the 54th minute, Tosin Adarabioyo met the end of a Willian corner to equalise. The centre-back’s header evaded everyone and rustled the bottom corner of the Forest net. The turnaround was complete only three minutes later, as Palhinha netted a screamer to send the away fans wild. The Portugal international received the ball on the edge of the box and emphatically curled the ball into the top right corner past the diving Dean Henderson. Three minutes later, the Londoners added a third in a quickfire demolition of Forest. It was Reid to Reed for Fulham as they scored their third goal inside six minutes. Bobby Decordova-Reid escaped down the left wing and sent across a pinpoint ball into the feet of Harrison Reed, who volleyed in to break the home fans’ hearts. The hosts got one back through substitute Lewis O’Brien when he punished Tosin Adarabioyo’s sloppy clearance. Brennan Johnson raced down the right and attempted to square it to Sam Surridge. The defender did well to intervene but his tired clearance fell straight to O’Brien, who tapped in to restore hope for the Reds. The result sees Nottingham Forest slip to 19th, whereas Fulham is cruising in sixth place.

Aston Villa triumphed over Southampton at Villa Park to relieve manager Steven Gerrard of pressure over the uncertainty over his job. Philippe Coutinho was inches off a wonder strike in the early stages of the game. The Brazilian expertly turned James Ward-Prowse inside out before releasing a strike from range that narrowly missed the target. Jacob Ramsey scored the winner in the 41st minute after chaos struck the Saints box. A short corner was taken, leaving Coutinho in space to whip a ball into the area. The midfielder did not hesitate and sent in a delicious floated cross, which was met by the forehead of Ollie Watkins. The striker glanced his header goalward but was denied by Gavin Bazanu, who tipped the ball onto the  bar. The ball bounced off the bar and dropped to Ramsey, who volleyed in from close range to give Villa the lead.

In the second half, Leon Bailey almost added a second with a low-driven strike that flashed across the face of the goal. Douglas Luiz almost recreated his goal against Arsenal a few weeks ago, but this time saw his effort from the corner flag tipped over the bar by the diving Bazanu. Steven Gerrard’s side took a deserved three points from the game after vastly dominating each half. The win takes Villa away from the relegation zone, tied on points with the Saints.