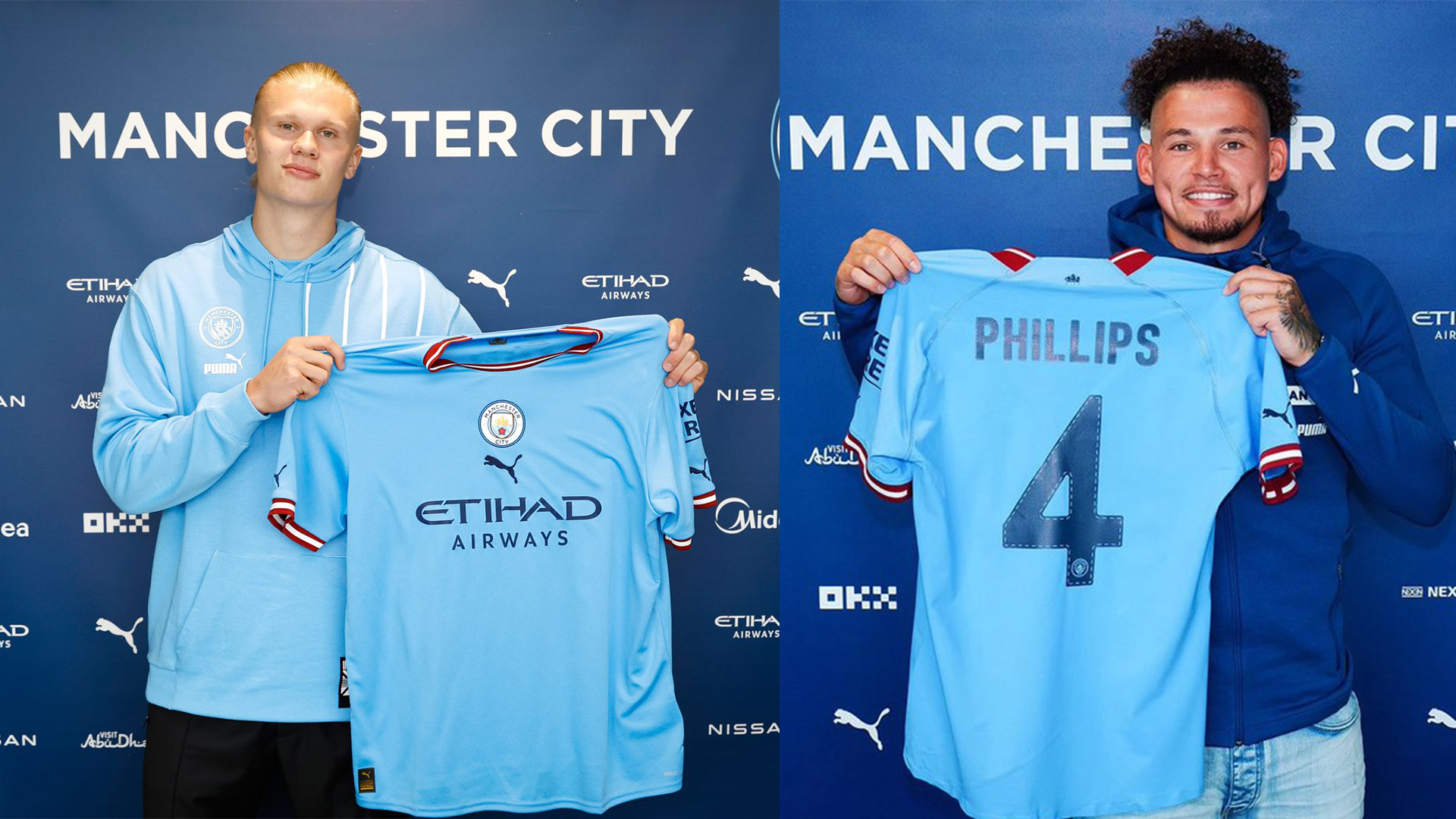 After dominating English football for yet another year, Manchester City recruited Erling Haaland and Kalvin Phillips to bolster their world-class squad.

The Manchester outfit ended the 2021/22 campaign by dramatically topping the Premier League table on the last day of the season, but this was not enough for the relentless Pep Guardiola. The Spaniard will be hopeful of finally lifting the Champions League with City this season and has captured two of the world’s hottest prospects to accomplish his mission.

Haaland burst onto the scene as a teenager, showing his natural goalscoring ability whilst at Molde. The Norwegian notched an impressive 14 goals in 39 appearances in his two-year spell at the club, impressing manager Ole Gunnar Solskjaer, who likened his natural pace and end product to that of Romelu Lukaku. His move to Manchester City was written in the stars, as his father, Alfie, represented City between 2000 and 2003. This was well documented and got City fans understandably excited. The Norway international bagged a stunning 62 goals in 67 appearances in the black and yellow of Borussia Dortmund and will look to set the Premier League alight.

Despite his father being a right-back, Haaland has all the attributes of an elite striker. His play style fits the needs of Manchester City perfectly, with the Sky Blues wanting someone to finish off the huge amounts of chances they create. Brazilian Gabriel Jesus departed for North London shortly after the the season end, leaving space for an attacker. Jesus scored plenty of important goals for Guardiola’s side and has played a pivotal role in each of the title-winning campaigns.

Last season, City played without a recognised striker in many of their games, with Guardiola opting for Phil Foden as a centre-forward who would link up with the wingers to supply low crosses and pass their way into almost unmissable chances. The Blues would dominate possession and utilise all their squad in attack, using overlapping fullbacks, Kyle Walker and Joao Cancelo, to offer support on either flank.

However, we will see a different City this season, as Haaland’s aerial ability will mean more crosses swinging into the danger area instead of playing it around the opponent’s backline until the perfect opportunity arises. In playing to the Norwegian’s strengths, City will possess a dangerous and constant threat putting the ball in the back of the net.

Just the sight of Haaland is enough to make any defender quake. He stands at an intimidating 6ft. 5 and is blessed with rapid speed. But to have him latching onto balls from midfield maestro, Kevin De Bruyne, will be a deadly combination, reminding fans of link-ups of Frank Lampard and Didier Drogba. Whilst at Dortmund, Haaland was provided by some of the world’s best, linking up with playmakers such as Marco Reus and Jadon Sancho, who now represent the red side of Manchester. His lightning speed gave him the ability to run in behind the opposition’s backline and race at goal, and with De Bruyne supplying balls over the top or low through balls for him to latch on to, it should provide good viewing for Cityzens, who scored 99 goals in 38 games last season.

The new man on the block scored his first City goal against Bayern Munich just twelve minutes into his debut in pre-season. The ‘robot’ finished a great move started by De Bruyne, who found winger Jack Grealish, who crossed in the path of the advancing Haaland, who tapped in the winner. A sign of things to come for Man City, as Haaland’s arrival may exert pressure off of the £100 million signing Grealish, who has shown flashes of his ability but has more to offer.

Haaland was not the only arrival in Manchester this Summer, as England international Kalvin Phillips made the switch from Leeds United in a deal worth £45 million. The ‘Yorkshire Pirlo’ signed a six-year contract with the club, and City fans will be hopeful he can fill the void left by defensive midfielder, Fernandinho, who departed after nine years of service. Phillips is a tough-tackling midfielder who assists the defensive line and helps transition defence to attack.

A product of the Leeds United academy, Phillips made his name in the Championship for his boyhood club and was crucial to United’s title-winning season under Argentine Marcelo Bielsa, the man who taught Guardiola the tactical side of football and management.

Phillips helped Leeds survive in the Premier League during the last two seasons but could not turn down the offer of playing for Manchester City and winning trophies. He was called up to the England squad for the first time in August 2020 and made his national debut the following month. The Jamaican-born midfielder earned a spot in Gareth Southgate’s squad for the 2020 European Championships, where England finished as runners-up. Phillips starred in the Three Lions' opening game against Croatia, where he claimed the Man of the Match award after pocketing Luka Modric.

However, it is expected that Phillips will be back-up to Rodri, whose stellar performances last campaign saw him named in the Premier League 2021/22 Team of the Season. The Spaniard is an all-rounder, as he finished the season with 91.8% pass accuracy and netted seven times, most notably that late winner away at Arsenal and the equaliser against Aston Villa on the last day of the season.

However, Phillips will fight for his place in the starting eleven and will have his fair chance on the side. Due to Man City playing many more games than others, they are so strong in other competitions. With his defensive abilities and capability to connect defence with the attack, Phillips will be a strong option from the bench in defending narrow leads . When playing, he will allow other midfielders such as Kevin De Bruyne and Ilkay Gundogan to attack, where they thrive.

Last season, Phillips made 20 appearances for Leeds in the league as he suffered a hamstring injury that kept him sidelined from December to March, missing the hectic Christmas schedule. During his time in the medical room, Leeds’s form dropped drastically as they fell to defeat on ten occasions out of 14 games played. During this poor run of form, United lost heavily at the Etihad as City put seven past them, with Leeds thrashed 6-0 at Anfield.

These two lacklustre performances highlighted how crucial Phillips was to Leeds and how much they will miss him this season.

Both additions look to be the perfect fit for Manchester City, which efficiently replaced Gabriel Jesus and Fernandinho. It will be exciting to see how they both do and what they bring to Pep Guardiola’s side. Will this be the year when Pep brings the Champions League trophy to the Etihad?