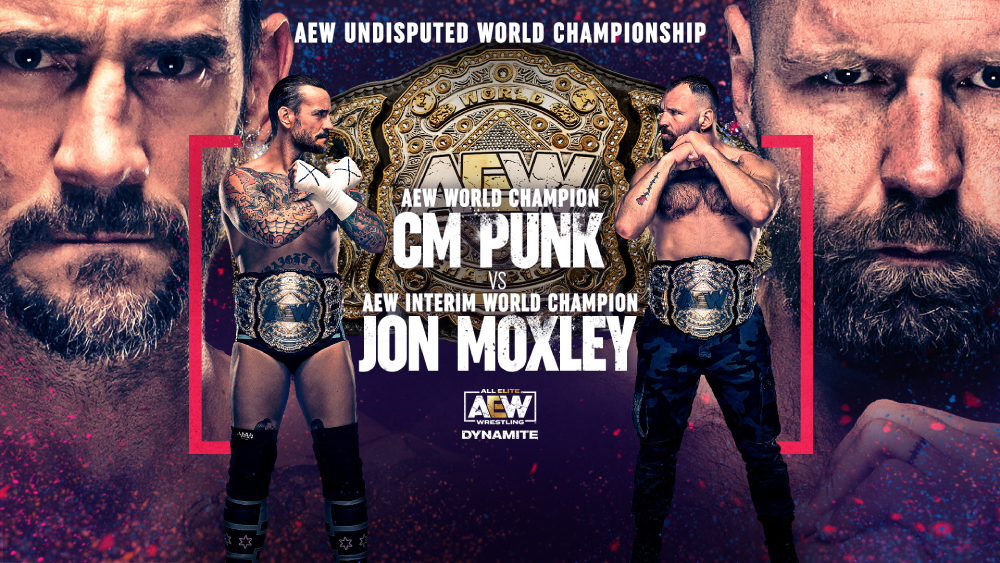 
AEW Dynamite had a lot going on this week as their premiere pay-per-view is one and a half weeks away. We are at the Wolstein Center, Cleveland, Ohio. Not only have we got a big World Title match between Interim World Champion Jon Moxley and World Champion CM Punk, but also the Death Triangle facing off against Will Ospreay alongside Aussie Open for the quarterfinals of the Trios Title Tournament.


The fans were taken aback when this big money match got announced on television. We couldn't help but anticipate some shenanigan was on its way as All Out still didn't have its main event scheduled. But now, this match will forever be remembered due to the incomprehensible affair that transpired within the squared circle.


AEW advertised this title unification as a massive thing that got the fans on the edge of their seats. So imagine everyone's disappointment when CM Punk not only lost his title to Jon Moxley but questionably did that.


After all the promo packages buildup leading to this contest, we see the champions go for a lock-up as soon as the bell rings. Punk gets shoved to the corner, where Moxley lands him with the offence. A minute later, Punk turns the tables to do the same. Punk tries to go for a kick, but he invertedly hurts himself in the previously injured foot. The referee calls in for the ringside doctor to check up on him, but Moxley doesn't have the patience to wait. He goes in for the kill and lands two Death Riders to secure the win. It's all over within 2:59.


Jon Moxley is no more the interim but the undisputed AEW World Champion. The only takeaway from this night that perplexed people was that CM Punk got jobbed out, barely even competing in the match to lose his championship.


One cannot help but wonder about all the dirt sheets over the last week's mention of the rift backstage. Allegedly CM Punk and Hangman Adam Page are not on good terms, which has furcated the roster into two. Many think that might have been the tipping point for this storyline to culminate.


Whatever the case might be, it looks sloppy and indecisive. What's next for All Out? How will Punk bounce back after this?


Ospreay's busy schedule continues as he faces the Death Triangle with Aussie Open by his side for the Quarterfinals. Fenix and Ospreay brought the crowd to their feet within half a minute to ensure this bout would be a spectacle. Both wrestlers are at their peak, and this being a trios match, very little order was to be expected, anyway. This match did a great job of presenting all the crazy flips and risks that one may anticipate.


The members of the Death Triangle send their opponents to the floor only to hit the stereo flip dives on the outside. Pac chops down Ospreay, which allows Fenix to kick him down for a two. Coming back from a commercial, we see Ospreay has regained control and hits a Sky Twister onto Penta and Pac. He follows it up with a running boot to the corner for Fenix.


Mark Davis took control and landed a running senton. After enduring heavy elbow strikes, Fenix applied a reversal to set Penta for a hot tag. Penta goes for a double-high crossbody, and everything breaks down in chaos as AEW takes another break.


We return with Pac being the legal man inside, clearing the ring. Both Aussie Open and the Lucha Bros come in to brawl. Both Ospreay and Pac hit each other's team with poisonous. They are the only two men left standing as they go for a staredown. After some exchanges, Ospreay drops Pac with the Oscutter. He tries to repeat the move on Pac in quick succession, but Pac catches him for a big super plex. Both men are down, and we go for the third commercial break.


In the ring, Ospreay tries hitting a hurricanrana on Pac, but the Stormbreaker is countered into a hurricanrana to give Pac only two. Again chaos prevails inside. Penta hits a Canadian Destroyer, but Pac is distracted by Kip Sabian- who is sitting in the front row with a rather stupid-looking box over his face. Kip has been doing this for months. He unboxes, but it's not Kip! It's somebody else. Sabian utilised the opening to jump Pac from behind, which leaves the action in the ring in favour of Ospreay, who lands in an assisted Oscutter to pin Fenix after 25:18.


Kenny Omega's music starts playing as we draw to a close programme. He comes out to ruin Will Ospreay's moment. These two men hate each other, as Britt has been openly vocal about how Omega has bailed out on him after promising plenty of things. Ospreay doesn't like Omega, and both the teams are to face each other in the semi-finals. The animosity between these two men is intense, as Don Callis tries his best to control Omega from rushing into something foolish as we close the curtains for this week.