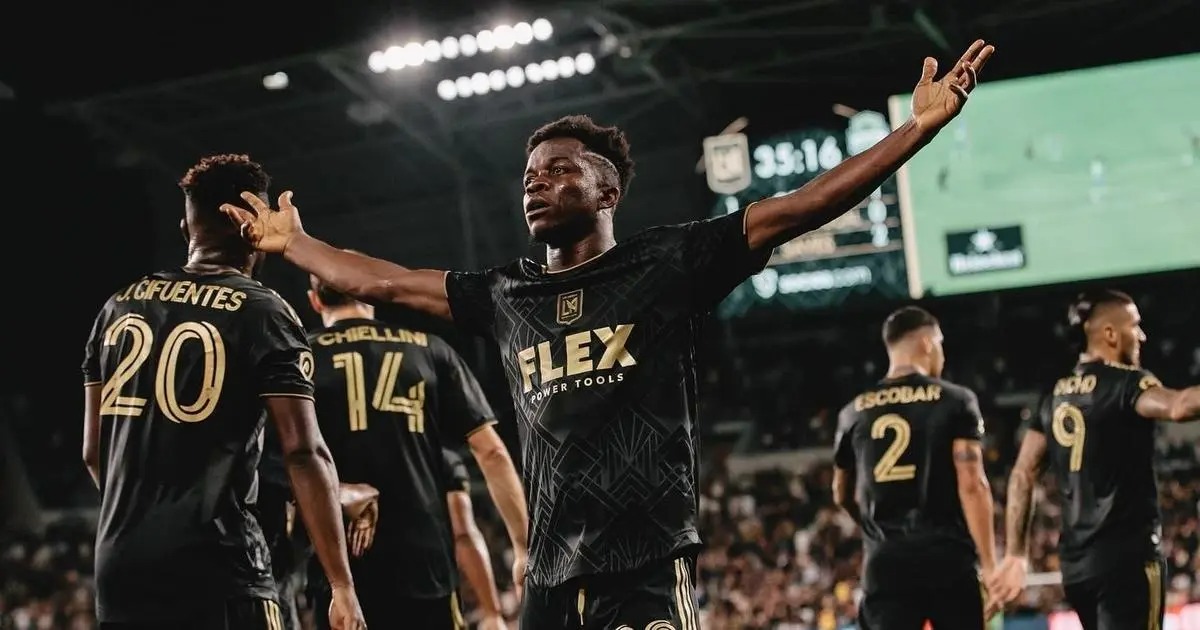 The Banc of California Stadium welcomed their two marquee signings- Gareth Bale and Giorgio Chiellini- on their home debuts. A pulsating game that saw the home side beat Seattle Sounders 2-1, courtesy of goals from Kwadwo Opoku and the unstoppable Carlos Vela. A win that now sees them leapfrog over Austin FC in the Western Conference by seven points with a game in hand. LAFC are also six points ahead of Eastern Conference table-toppers Philadelphia in the race for the supporter’s shield.

Seattle, who won the Western Conference final at the Banc in 2019, started promisingly in a 4-2-3-1 formation. Schmetzer’s men got off to a dream start when Christian Roldan took advantage of a poor LAFC clearance. He won possession high up the field and breezed past Latif Blessing, Ilie, Escobar, and Chiellini to drill in a powerful low cross, only for Murillo to put it back in his net. The American international’s reward was down to his tenacious box-to-box display that gave the Sounders the lead in the 14th minute and left the home crowd stunned.

The home side went close to levelling the score when Carlos Vela’s twist and turn and pass to Jose Cifuentes, who set up a neat little one-two flick with Blessing, only for Cifuente’s effort to be saved by the Sounders goalkeeper Frei.

In the 27th minute, LAFC appeared to have equalised from a breath-taking strike by Carlos Vela. It was later turned down by the video review, which indicated that the ball had initially bounced off the captain’s arm.

The away side almost doubled their lead just after the half-hour mark from the Slovakian International Albert Rusnak’s corner kick which went straight towards Xavier Arregea, who was unmarked and failed to capitalise on LAFC’s defence switching off during the set piece play.

Kwadwo Opoku, fondly called Mahala, brought back the home side on level terms with a thunderous strike that blazed past the Sounders defense and Stefan Frei, whose diving effort could not stop the Ghanian's goal as he netted his fifth goal of the season.

In the 37th minute, Giorgio Chiellini dipped forward higher up the pitch from Frei’s goal kick, where he dribbled past Nicolas Lodeiro to fire a fascinating left-footed drive where Sebastian Frei had to get a touch. Angel Di Maria, Manuel Locatelli, and Chiellini’s defensive partner at Juventus- Leonard Bonnuci, the most notable guests at the stadium, were left in awe by the former Old Lady legend’s thunderous strike.

Fantastic Frei was into the act yet again as Vela’s switch of play to the left flank towards Blessing, who played it into Cristian Arango’s feet, only to see him save from point blank range on what certainly looked to be Arango’s tenth goal of the season.

Moments before the first half whistle Carlos Vela got his goal, who found a tight area to squeeze in a wonderful cross from Cifuentes. The club captain’s seventh goal of-the-year put the home side ahead, but the key talking point during half-time would be the latter’s vision and ability to find the Mexican international.

LAFC started the second half brightly when a Cifuentes through ball to Mahala Opuku saw the latter’s shot go wide. The home side grew into confidence with a wonderful display from the coaching manual between Carlos Vela, Ilie, Cifuentes and Palacios. The cross from the flank to Opuku’s deflected effort had crippled its way towards Blessing, only for Frei to save it on the goal line.

The moment that the entire crowd was waiting for had then finally arrived when Gareth Bale entered the field with 28 minutes to go to mark his home debut for the club. The Welshman dazzled with moments of brilliance and intelligence by linking up with Blessing and Cifuentes. The former Real Madrid star gave a taste of what he would bring to the table for the LAFC faithful.

With the game ending 2-1, Los Angeles Football Club's fourth consecutive win of the season as their two new marquee signings are yet to taste defeat can only result in more positivity and energy for head coach Steven Cherundolo’s side.