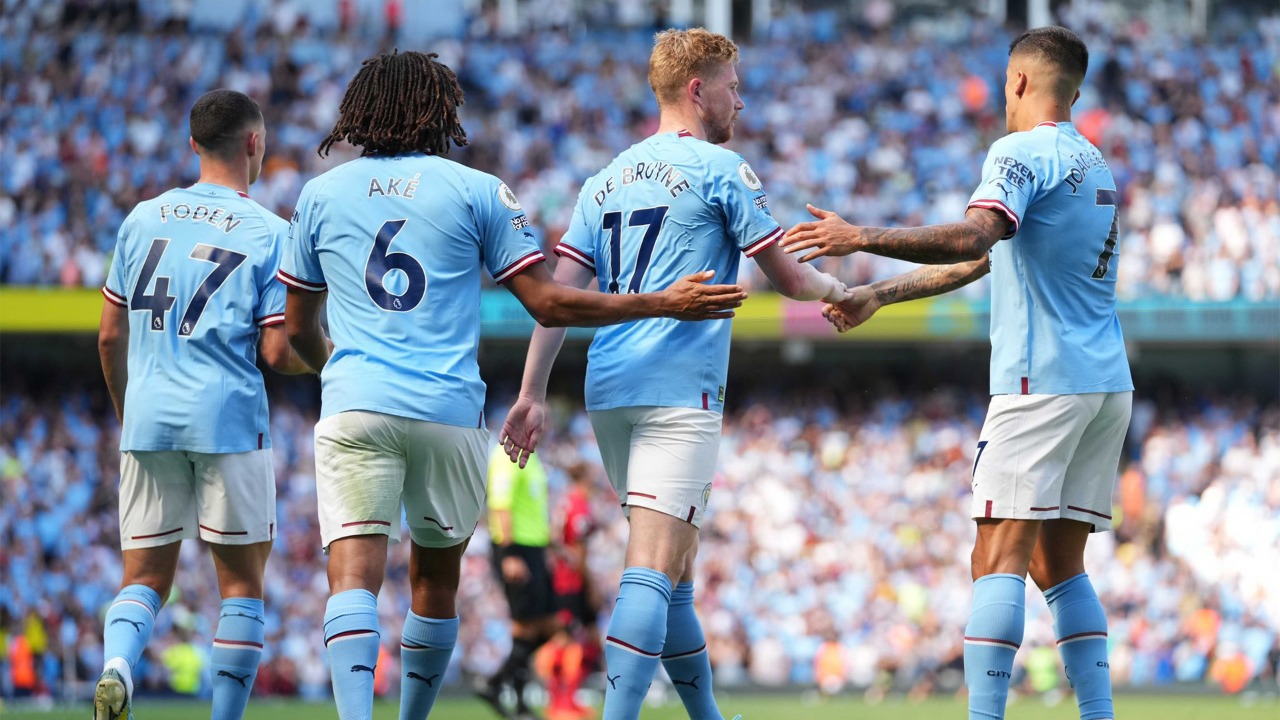 Manchester City, Arsenal, and Aston Villa win big in the second week of the Premier League

Game Week 2 turned out to be a good one for the home sides, as they didn’t see a defeated Match Day two kicked off at Villa Park, where Steven Gerrards’ Aston Villa was hosting Frank Lampards’ Everton. Both the teams had lost their opening games of the new season.

Frank Lampard had made two changes to his side, both in defence, with Conor Cody and Mason Holgate starting. Steven Gerrard also made two changes, with Tyron Mings and Ollie Watkins added to the team. Villa started the game dominantly while Everton tried to hit the villa on the break. Everton thought they had taken the lead when Gordon headed in a close-range Everton corner in the 24th minute, but Gordon was flagged for offside by former Everton player Digne. Villa responded well to the scare and won the possession back in the final third. And Watkins received the ball deep in the right-wing while finding former Liverpool man Danny Ings near the box, who opened the score for Villa with a taken goal. Villa takes the lead 1-0.

In the second half, Everton came out putting pressure on Villa, and in the 53rd minute, Gray fired a shot by shaking off Cash and cutting inside, but it was too straightforward for the Argentinian Goalkeeper. Villa kept creating the chances, and Everton tried to hold them off, but in the 86th minute, as Everton tried to conjure something up to get at least a point, Buendia made it 2-0 for the Villa. Everton again lost the ball inside their half and invited the villa to counter quickly. In the 87th minute, Onana was brilliant on the left, which saw him cross the ball, and Digne couldn’t sort his feet out, resulting in an Own Goal. Game on! Everton did create a few close chances but failed to make them count. Villa will hope to build on the momentum from now, while Everton has issues to address for them to stay up in the top flight comfortably.

Mikel Artetas’ Arsenal side built on their winning start by thrashing Leicester at the first home game of the season. Even though both teams had roughly equal amounts of possession, Arsenal generated a lot of opportunities and had more than three times as many shots as Leicester. The game was evenly poised as both teams strategically started the game. Long-term injury returnee Wesley Fofana was booked early on. In the 23rd minute. Arsenal took the lead with new signing Gabriel Jesus scoring a beauty, curling the ball inside from 15 yards! Arsenal extended their lead in the 35th minute from an Xhaka corner with Martinelli flicking it, and Jesus was there again at the back post scoring a simple close-range goal. Just before halftime, the referee awarded a penalty to Leicester as Vardy tumbled into Ramsdale, which was then overruled by the VAR as there was no contact with the striker.  Arsenal leads 2-0.

Leicester fought back and scored in the 53rd minute when Justin flicked a long ball that Saliba misjudged, and the goalkeeper headed it back into his net. It is 2-1. However, Arsenal maintains composure and immediately regains the lead with a goal from Xhaka from 12 yards, assisted by Jesus via a risky cross from Saka, in the 55th minute. It is 3-1. Leicester showed some fight back by scoring their second goal in the 74th minute. Iheanacho dribbled towards the box and reverse passed it to Maddison, who beat Ramsdale to score from a tight angle. Game on! Arsenal restored their two-goal advantage as Martinelli sent a low curling ball from 20 yards, beating the keeper for Arsenal’s fourth goal in the 75th minute. The sensational display by Jesus puts Arsenal on top of the table, which they would hope to continue.

Brighton hosted Newcastle in their first game at the home of the season. The match resulted in a stalemate, with Brighton dominant of the two. In the 26th minute, a poor clearance by the Brighton backline and Joelinton sent the highly talented Saint-Maximim away, which then he crosses to Almiron, but his shot is into the stands. It was goalless at halftime. The hosts had better chances and possession but didn’t have anything to show for it on the scoreboard.

The second half is no different as Brighton was the one creating more chances, and in the 50th minute, Marchs’ crosses into Lallana, who then tries to score but is pushed away by Pope. Brighton kept knocking on the door of Newcastle but, in the end, had no cutting-edge finishing to register a goal as it was a stalemate at the end.

The defending champions started the game as they generally do by having more possession, shots and chances created. It was one-way traffic as Bournemouth just tried not to get thrashed. In the 19th minute, City opened the scoring through Gundogan, assisted by the new number 9 Erling Haaland. In the 31st minute, they make it 2-0 through De Bruyne as Bournemouth got caught up field, and Foden found de Bruyne, who then does some stepovers and fires a shot into the left corner. The score line changed quickly in the 37th minute in a role reversal as De Bruyne finds Foden where he takes a shot whose power is too much for the keeper to keep out. The game was done and dusted. City leads 3-0 at halftime.

The second half kicks off, and so does City. City made a real lightwork of creating chances off Bournemouth in both halves. In the 55th minute, De Bruyne takes a shot from a pass from Gundogan, which was stopped by the keeper comfortably. The second half was City players taking shots at Bournemouth in a queue. As a result, in the 79th minute, Cancelo drills a cross into the 6 yards box, which ricochets off Lerma into his net. Own Goal. City leads 4-0. City’s dominance continues on the second matchday as well.

Southampton comes from behind to rescue a point at St. Mary’s stadium. Both teams were poised for their shoots evenly. Rodrigo immediately presents some difficulties for the Southampton defenders as the first half begins. In the opening 28 minutes, Leeds makes a substitution as Daniel James, a former Manchester United player, is brought in to replace injured Bamford. It is 0-0 going into the half time.

The second half kicks off, and it’s a goal! Rodrigo scored just 30 seconds into the second half. Harrison collected the poorly cleared ball by the Southampton defenders and is neatly finished by Rodrigo. Leeds takes the lead. 0-1. In the 60th minute, Leeds doubled their lead through Rodrigo again. Assuming Raphinha's place, Aaronson whips the corner into the box, Struijk attacks as it loops over Bazunu's hands, and Rodrigo scores easily at the back post. Southampton finds themselves 0-2 down at home. Hassenhutl responded with substitutions, and in the 72nd minute, the hosts pull one back through Aribo. Armstrongs’ cut back is towards Aribo, who then shoots clinically. Game On! Southampton then pushes for the equaliser, and in the 81st minute, Walker-Peters levels the score line as he scores a low strike past Meslier. The game ended as a draw as both sides tried to find ways to build a winning momentum.

Will Zalatoris Wins $2.7 Million at the 2022 FedEx St. Jude Championship