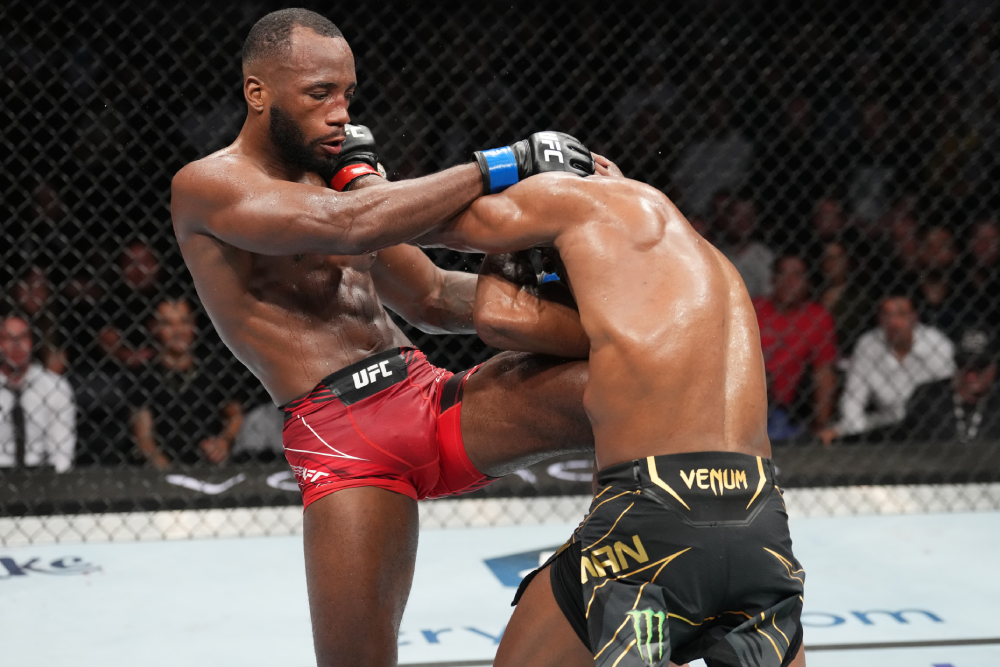 “Look at me now.” In the last seconds of the fifth and final round of the UFC 278 Welterweight Title Fight in Salt Lake City, Utah—a city whose name he had never even heard of—Leon Edwards stunned the champion, Kamaru Usman, to make his grand entrance on the big stage.

In doing so, the Jamaican-born Edwards becomes the first British champion since Michael Bisping knocked out Luke Rockhold for the Middleweight title in 2016.

Going into the match as the heavy underdog, Edwards had already lost one fight to Usman in 2015. Usman had a 19-fight win streak behind him and looked odds-on favourite to make it 20 straight wins and the 6th UFC Welterweight Title defence. Edwards was also on a 9-fight undefeated streak since that loss to Usman in 2015.

Edwards started the match well, taking Usman to the ground – Usman conceded a takedown for the first time in his career – in the first round, took his back, almost submitting him with a rear naked choke. Usman returned to exert his superiority in grappling and on the feet, pushing him back to the fence with a flurry of punches to the head and the body in the second, third and fourth rounds. He took Edwards to the ground multiple times as he controlled the pace of the match and slowly tried to wear out Edwards’ conditioning which was already being affected by the high altitude at which they were fighting. Usman was doing heavy damage while they were trading punches, including several elbows to the side of Edwards’ head. All the judges had Usman winning 39-37, as we saw when UFC released their official judges’ scorecard.

During the minute between the 4th & the 5th rounds, Edwards’ boxing coach, Dave Lowell tried to shake him up and yelled at him to “stop feeling sorry for yourself”. Edwards was gloomy and embarrassed to look into the eyes of his coach. His shoulders sagged, and he lacked confidence. Analyst Din Thomas said on the broadcast, “If it wasn’t obvious enough, Leon is broken now. And the biggest tell that you can always know this is because he doesn’t give his coach eye contact in the corner. When you don’t give him eye contact, you’re ashamed, and he’s embarrassed right now of his performance.”

Usman was leading in the 5th round and fought under his control. As the clock ticked over 4 of the stipulated 5 minutes, Edwards unfurled a left high kick to Usman’s head. He superbly disguised it behind a right, then a straight left punch which made Usman tilt his head slightly to the right and then his left leg made contact with the side of Usman’s head, from which he never recovered. Usman hit the floor, and the seasoned referee Herb Dean called the fight in favour of Leon Edwards.

He also paid an emotional tribute to his mother, “I want to, first of all, thank God. Mum, I love you. I told you I'd do it for you ma. I told you I'd change your life. I told you I’d do it. Look at me now.” He continued, “I can’t explain it. God is on my side. I said all week I felt like my moment. Everything (that has) happened in the past. Two years out. The pandemic. All of it. They all said I couldn’t come back and do it. There’s no ring rust. I told you that already. Now, look at me. Champion of the world.” He didn’t forget to highlight his old roots, “I was born in Jamaica with nothing. I lived in a wooden shed. Zinc roof. Look at me now. We got it, baby!”

He thanked Dana White, the UFC president, in his final message, “Thank you, Dana, thank you to the UFC for giving the kid who was born with nothing an opportunity to be something. Thank you."

Cameras showed Edwards in tears on a video call with his mother backstage following the fight, saying, "I told you, mum, I would do it."  Born and raised in Kingston, Jamaica, he moved to Birmingham when he was 9. Four years after this, the death of his father at 13 saw him get involved in gang culture. At 17, when he was walking to the bus stop with his mother, she spotted a gym above a DVD rental store offering training in mixed martial arts. He joined and never looked back.

Edwards recognises the power behind his remarkable transition - and wants to help others looking for a change. He credits MMA with potentially saving his life. “I wanted to be a better person than my story was. The more my profile grows, the more I succeed, and the more I want to help. I want to show people now it's not where you start. It's where you finish. If I do it - if I become champion - it shows everyone else what's possible, too."

MMA derives its greatness from the glorious chaos it can conjure up in a matter of moments and deliver some of the most incredible moments in sports. Edwards grew up poor, lost his father at a young age, fell into destructive ways, was able to change track, overcame numerous obstacles in his career and ultimately accomplished something he could be proud of.

Edwards now has his eyes on a title defence in the UK in March next year.