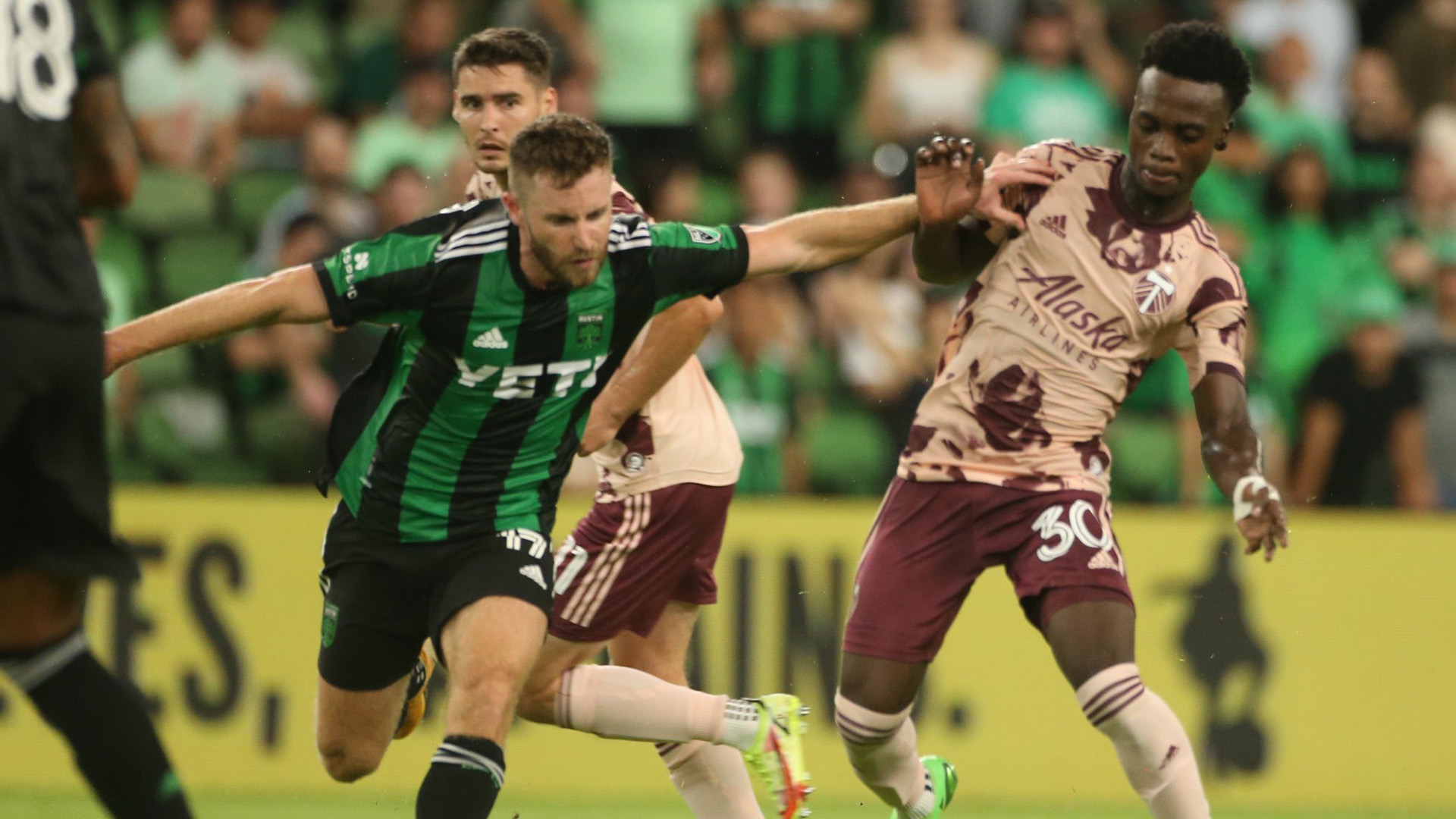 
Austin FC came into this encounter on red-hot form, but the Portland Timbers stood tall in front of another raucous sell-out crowd at the Q2 Stadium.

The wrath of Mother Nature led to a delayed kick-off time of over an hour. The stormy weather transpired to be an ominous sign of what was in store for the Austin defence.

La Verde came out of the blocks like the lightning crackling in the clouds above the Q2 Stadium, as early as the fifth minute the impervious Ivacic in the Portland goal was called upon.

The fleet of foot and mind, Gallagher charged down the left wing for Austin. He conjured a mishit cross which arrowed towards the majestic Fagundez. The Uruguayan somehow managed to glide the misplaced pass into the path of the onrushing Finlay, who smashed a venomous first-time strike towards the goal.

The goal-bound effort seemed destined for the net but as he has done with increasing frequency of late, Ivacic responded with preternatural reactions and nonchalantly denied the Austin home crowd of the early goal they craved.

A lesser goalkeeper than Ivacic would have succumbed, but the Timbers are blessed with one of the most on-form goalkeeping warriors in the MLS. The Slovenian is growing in stature with each passing game after a shaky start to his number one duties in the Timbers goal.

Austins’ supporters are in a boisterous mood on their home patch this year, and they are backing their side in massive numbers, so much so that they are currently on an MLS record-breaking run of 31 consecutive home sell-outs.

The passionate Q2 crowd is generating a particularly vociferous amount of noise this season as they invoke a level of fanfare that is pushing their team to the Holy Grail of the playoffs. But in the 15th minute, a well-orchestrated Timber’s set piece stunned the partisan home crowd into silence.

Eryk Williamson, fresh from unleashing a blitzkrieg upon the Seattle defence, repeated the trick against the Austin unsuspecting backline.

He released an in-swinging dead ball, which flew through the night air into the Austin six-yard box, the ball seemed to hang mid-flight as if under an orphic spell begging someone to hit it. The colossal Bill Tuiloma duly obliged with a towering header, which smashed into the Austin net.

Josh Wolff’s Austin has been ruthless in front of goal this season, smashing 59 goals, and with their Argentinian attacking weapons weaving attack after attack, it seemed a matter of when and not if Austin would equalise.

The Timbers stood tall on the rain-soaked pitch to take a one-nil lead into the halftime break.

Portland has not gotten on a roll so far this campaign. They sluggishly started the season, only winning three games and losing six during the first three months.

They looked to have improved during June and July with four wins and four draws, but in the familiar surroundings of home comforts, Austin is almost impossible to resist, in their last five home MLS games. They have averaged 3.4 goals a game, scoring four in their previous two home encounters to boot.

All the signs and omens pointed towards a romantic Austin FC fightback in the second half in front of their electric and expecting home crowd. But, unfortunately, when an inviting opportunity in the 57th minute fell to Austin’s prolific Sebastián Driussi, his header cannoned off the crossbar.

Portland’s massive win over fierce rivals Seattle last time out seems to have reinvigorated them.

In the 73rd minute, the Timber’s assist-machine Eryk Williamson set off on another tormenting merry dance down the left wing, he uncharacteristically cut inside the Austin box and shot himself instead of seeking to provide to a teammate.

Stuver, in the Austin goal, could only parry the effort away, and the ball fell to Portland’s centre-back Zac McGraw who smashed home his first goal to extend the Timber’s lead.

With Austin’s hope hastily diminishing, they needed someone special to save them, up stepped Argentinian maestro Sebastián Driussi again, and this time he made no mistake.

Driussi, who is right in the running to win this season’s MLS Golden Boot, headed over the fantastic Ivacic to plunder his 20th goal of the campaign.

The Timbers weathered the Austin storm in the closing stages to secure the win and enhance their playoff credentials with a surprise win.