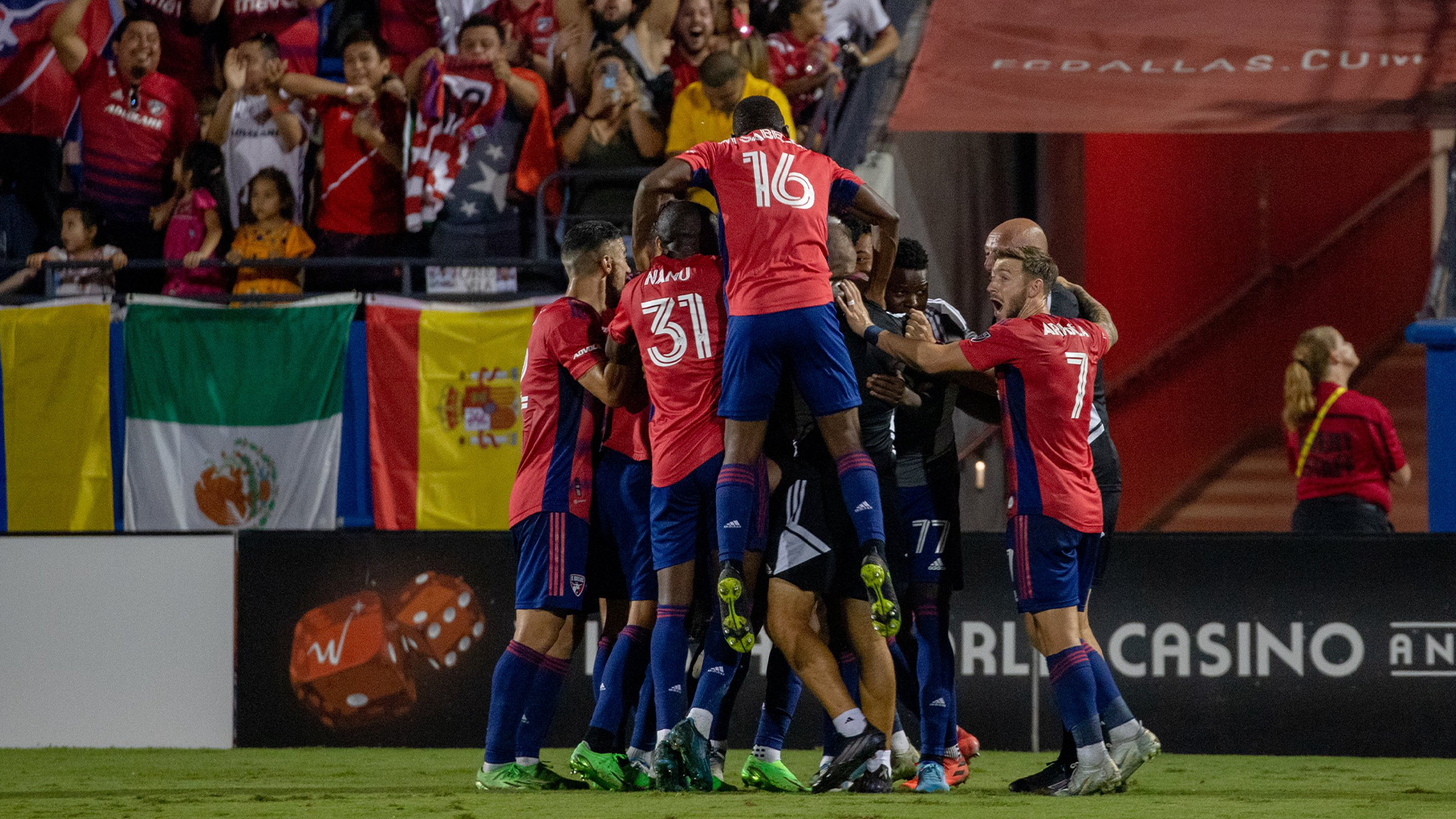 By James Pendleton
With Ryan Hollingshead's early dismissal setting the tone for a tense game at the Toyota Stadium, FC Dallas overcame table-toppers LAFC on Saturday thanks to a late double from Jess Ferreira.
Despite the 31-year-old's 13th-minute dismissal, the Californians took the lead in first-half stoppage time to lead the game at the break. But Dallas skipper Ferreira was the hero with a three-minute brace late, snatching victory from the jaws of defeat for NicoEstévez's promotion pushers.
Hold your Hollingshead in shame
It was action from the first whistle on the west when Nkosi Burgess aimed to pick out Paul Arriola with a searching ball from the edge of his penalty area. The American expertly controlled his chest before looking to take a shot on goal from the edge of the LA box, only for Ryan Hollingshead to get back and make a last-ditch tackle on the number seven, which he claimed to make contact with the ball first.
Referee Jon Freeman took a dim view of the incident and initially booked the full-back before upgrading the card to red, following consultation with VAR to leave LAFC a man down with over 75 minutes still to play. Dallas started to play with more swagger and carved the visitors open soon after Arriola squared the ball for Sebastian Lletget, laying it off for Marco Farfan before he found Jesús Ferreira on the edge of the area.
The 21-year-old sidestepped the advances of Giorgio Chiellini, but his side-footed effort lacked power and was easy save for Maxime Crépeau. The Burn was getting plenty of joy down the left and forged another effort on goal from Hollingshead's side, with Arriola squaring for Lletget, who did well to get there, but his attempt on the stretch was straight by Crépeau before the LA defence scrambled the ball clear.
Denis Bouanga and José Cifuentes led a breakaway that ended with the former having his effort well saved by Maarten Paes before the latter rounded Paes only to fire his shot narrowly wide amid a sea of Dallas bodies. However, LA is top of the table for a reason and started to turn the screw despite its numerical inferiority. Down the other end, it was Crépeau called into action once more as Dallas took a short corner to Edwin Cerrillo on the edge of the area. However, the Canadian did an excellent job of scurrying over and deflecting the American's goal-bound attempt.
The save would prove crucial as just a couple of minutes later, Chiellini lofted a brilliant ball over the Dallas rearguard with the outside of his boot in search of Cristian Arango, who scampered clear before lofting the ball over the head of the onrushing Paes to give LA the lead.
Jesús turns chances into goals
Despite suffering a sucker punch at the end of the first period, Dallas picked themselves up off the canvas and thought they'd equalised through the busy Arriola, but he'd timed his run a second too soon from Ferreira's through ball and was adjudged to be marginally offside.
Farfan was brought down by Franco Escobar close to the corner flag, but they would eventually draw even. Arriola took a quick free kick and slipped Ferreira through. And from just outside the visitor's six-yard box, Ferreira drilled home an unstoppable effort as the LA players protested the decision. Three minutes later, another free-kick proved to be the downfall of Steven Cherundolo's team, proving that he wasn't finished yet.
This time Ferreira stood over the ball himself from the right-hand side of the LA box and floated a teasing ball in which Gareth Bale stooped to head clear. But he missed it and deceived keeper Crépeau in the process, who dove past a shot which would eventually nestle in the far corner of the goal with ten minutes to go.
Dallas held on to claim second, a straight win and close the gap on second-placed Austen to just two points, while LAFC has now lost four of their previous five games but retains a nine-point lead at the top of the Western Conference.
Line ups
FC Dallas: GK Maarten Paes, Ema Twumasi (Nanú 63"), Nkosi Burgess, Jose Antonio Martinez, Marco Farfan (Joshue Quinonez 83'), Paxton Pomykal (Tsiki Ntsabeleng 73'), Edwin Cerillo (Facundo Quignon 73'), Sebastian Lletget, Jader Obrian (Franco Jara 63'), Paul Arriola, Jesus Ferreira
LA FC: GK Maxime Crépeau, Ryan Hollingshead, Jesús Murillo, Giorgio Chiellini, Diego Palacios, Latif Blessing (Franco Escobar 16'), Ilie Sánchez (Kellyn Acosta 46'), José Cifuentes (hegson Méndez 81'), Carlos Vela (Gareth Bale 59'), Denis Bouanga, Cristian Arango (Kwadwo Opoku 59')
Match stats
FC Dallas LAFC
Goals 2 1
Possession 67% 33%
Shots 13 9
Shots on target 8 2
Corners 6 2
Yellow cards 0 2