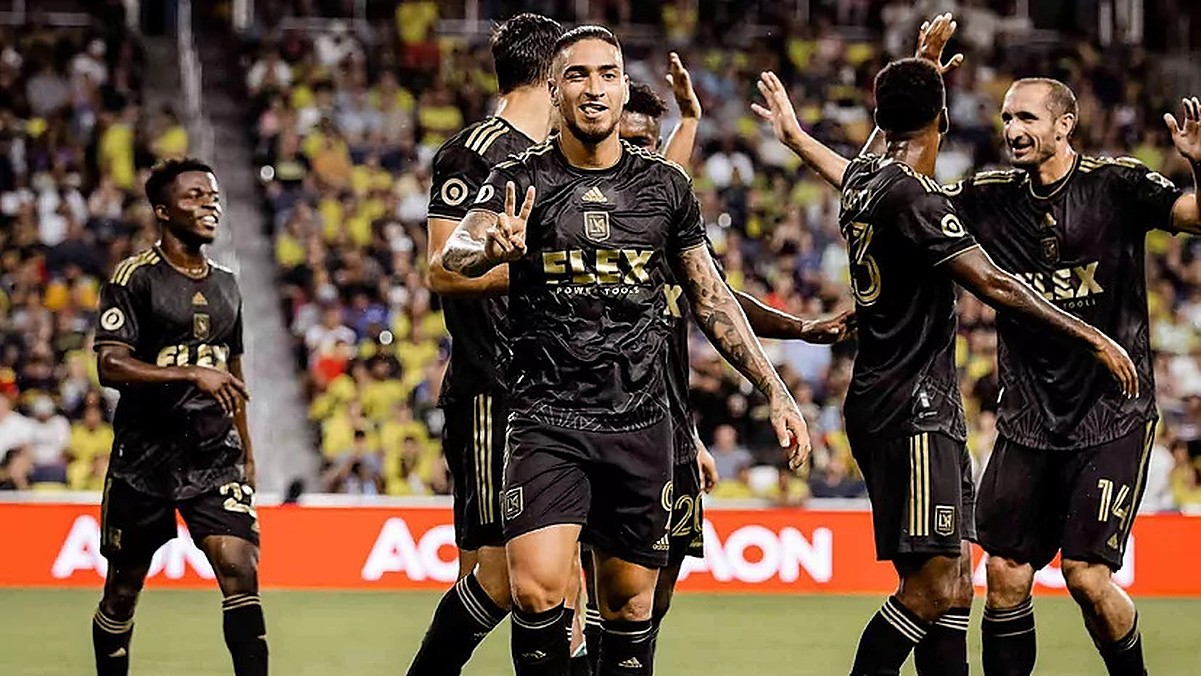 The Los Angeles FC Juggernaut is on a roll. Unbeaten in 4 matches, they continued this run with a 3-1 victory over FC Dallas. This crushing victory took the Los Angeles-based team to a 5-match unbeaten run and consolidated their position at the top of the Western Conference, with a record of 11 wins-3 draws-3 losses and amassing 36 points.

A younger LAFC team was watched over from the stands by their soon-to-be teammate and the legendary Italian centre-back, Giorgio Chiellini. The ex-Juventus icon is another latest Italian export to MLS, following in the footsteps of Lorenzo Insigne and Domenico Criscito, the pair joining Toronto FC.

“I would say that LAFC is the perfect team for me because the team is full of young players. I think they can help me,” the 37-year-old Chiellini said Wednesday during his introductory press conference and before being presented to LAFC fans. “Surely, I can’t have the same physical characteristic as ten years ago, but I can bring something to them, and we have to create a good mix of experience and enthusiasm with younger players to become a winner.”

And it is not just Giorgio Chiellini who will ply his trade for LAFC. Gareth Bale also has committed to an 18-month contract with the club. Both the players will be eligible to play for their new clubs after 8th July.

11th Minute: LAFC almost conceded a goal if not for a crucial save from Maxime Crepeau, who got a palm to a vicious long-range strike from FC Dallas’ Edwin Cerrillo’s strike from a distance.

23rd Minute: A long ball from Jose Cifuentes was gathered beautifully by Danny Musovski, who buried the ball into the net to give the hosts the lead and the 26-year-old wide forward scored his second goal in the Western Conference.

38th Minute: Visiting FC Dallas put the dagger through LAFC’s defence with Jesus Ferreira putting the away side on equal terms. The 21 year old making his case for inclusion in the World Cup squad this November. A set piece routine where Dallas faked the initial attempt, bringing Maxime Crepeau far away from his line and Ferreiburieding the dead ball into the goal for his 10th goal of the league campaign.

End the of the first half: LAFC 1-1 FC Dallas

57th Minute: A dead defence-splitting pass from the veteran Carlos Vela, who recently signed a contract extension and ended up becoming the assist for the second goal for the home side, scored by the Colombian striker Cristian Arango. This was his sixth goal of the league campaign, an epicentre-forwarded goal choosing to bury the ball in the bottom corner with a mix of power, technique and placement to beat the keeper.

67th Minute: With FC Dallas trailing a 2-1 score, Nico Estevez, the 42-year-old coach of the away side made a double substitution to clinch a point off the hands of the leader. Brandon Servania, the 23-year-old midfielder, made his way for 24-year-old South African midfielder Tsiki Ntsabeleng. The 27-year-old Colombian Jader Obrian made his way for the talented 19-year-old Argentine winger Alan Velasco, who joined the Dallas side, famed to promote youth players from Independiente in February 2022.

71st minute: The home side also decided to make a double substitution with the 31-year-old American right back Ryan Hollings head brought off by Steven Cherundolo in favour of the 27-year-old Argentine Franco Escobar and the goal scorer Musovski paving his way for the 20-year-old youngster Kwadwo Opoku.

76th Minute: Yet another double substitution for FC Dallas, the Spanish manager bringing on the talented midfielder Paxton Pomykal for a striker with the veteran Franco Daniel Jara making his way on the pitch to score. The right back Ema Twumasi came off for Guinea-Bissau international Nanu.

86th Minute: LAFC tried to dominate the visiting side in the hunt for a third goal, which eventually came, courtesy of the Ghanian-American winger Opoku, who latched onto the pass of evergreen Carlos Vela and saw his strike hit the post across the goal line to send the home crowd erupting in the stands.

87th Minute: Yet another slurry of tactical substitutions from both sides to keep the result in their favour. LAFC bringing on Francisco Ginella and Eddie Segura to keep fresh legs in the midfield, while FC Dallas brought on Facundo Quignon to thread long balls over the opposition’s defence from the deeper areas of the midfield.

The later substitutions didn’t work for FC Dallas as they tried their best to get a point on the road and maintain their fourth place in the table. The LAFC substitutions, on the other hand, worked like a charm. 35 goals in 11 matches and first place maintained in the table as the league campaign nears the 50% completion stag. Meanwhile, FC Dallas is 1-4-1 over its last six matches. Overall the team has lost four of last five matches against LAFC. FC Dallas has allowed 12 goals in the past six matches after giving up just eight in its first 11 games this season.

Giorgio Chiellini was cheering for his new side from the stands, then jumped on the pitch at the end of the match to celebrate a resounding victory with his new teammates.