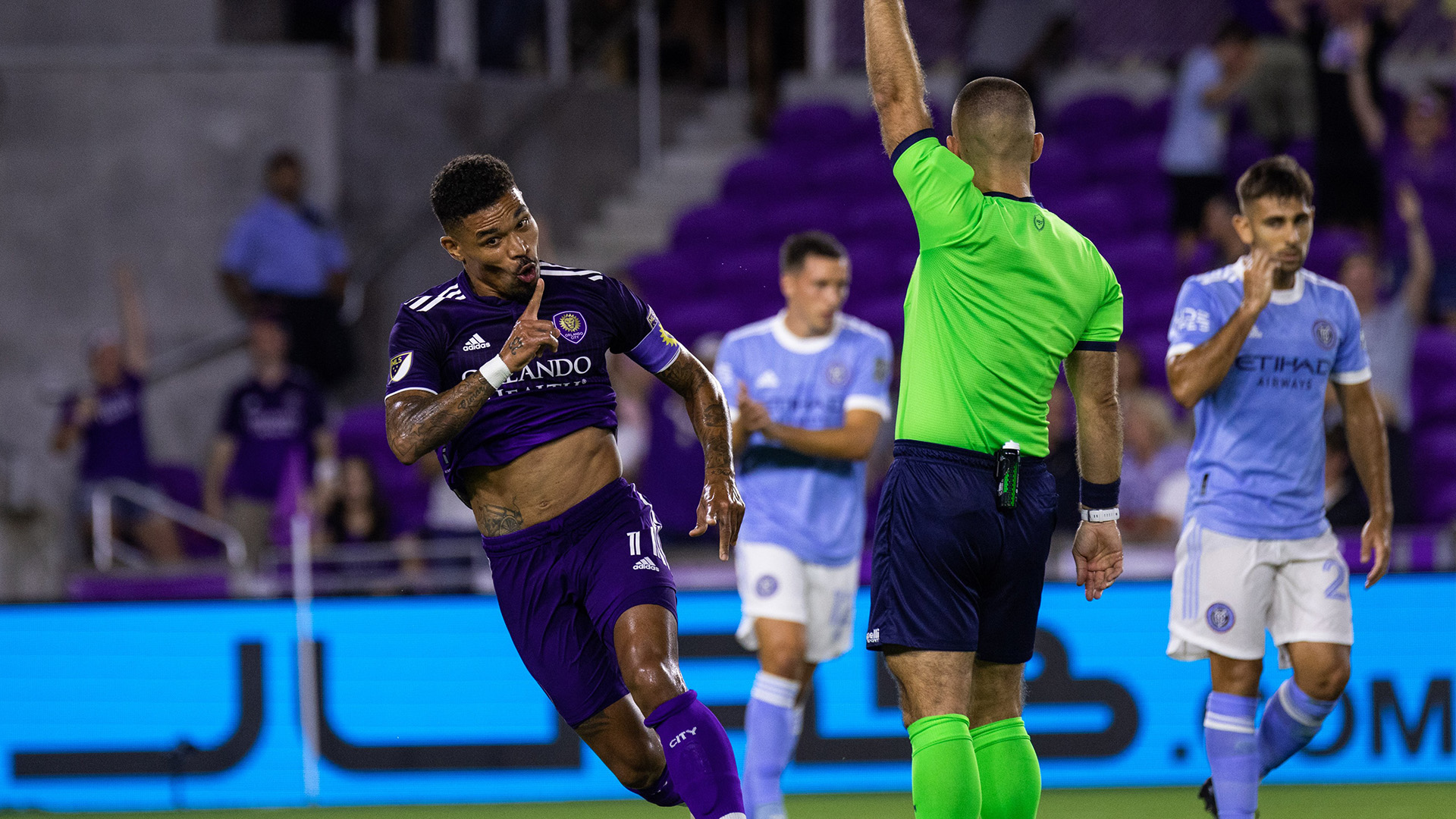 
On Sunday evening, Orlando City SC took a 2-1 home victory over New York City FC. Heavy weather caused the first half to be dull, but the second was overwhelmed by free-flowing attacking passes and a dramatic finish that gave Orlando the victory.

Scrambling actions in the Orlando torrent


In the seventh minute, from a right-sided throw-in, Junior Urso glided away from Justin Haak to drive towards goal and knocked the ball back to Facundo Torres. Receiving the return with a heavy first touch, Junior Urso launched the mid-air ball into the top left corner. While the goal was initially called back for offside, a Video Assistant Referee (VAR) review showed that the Brazilian was played onside by Anton Tinnerholm. 1-0 or Orlando.


As the match approached the fifteenth minute, the rain started coming down. In the obscuring view, Orlando supporters were chanting lively whether in a poncho or not. On the field, the condition is evidenced in the eighteenth minute when Talles Magno slipped and was in a one-on-one situation versus the goalkeeper.


As puddles formed surrounding the field, short passing lost its effectiveness since the ball became easily caught in place. Scrambles and lunging clearances resulted from the ball's unpredictable in-place stopping due to such events. Such a situation also brought up freak fouls and injuries, forcing NYCFC to replace Thiago Martins with Tayvon Gray out of concern and Orlando's Pedro Gallese to require medical attention ten minutes later.


As Orlando adapted to the conditions, Urso curled in a shot from the edge of the box at the 28th minute, which went inches wide, and blasted a long-range effort two minutes later, which Sean Johnson stretched himself to the fullest to save. On the other hand, NYCFC only had a single stoppage-time effort from Talles Magno, which went wide of the goal.


A late goal to make up for an early slip-up


As the weather cleared, Orlando had a scare. Antonio Carlos seamlessly wrestled NYCFC off the ball, drove forward and as the Brazilian reached the midfield circle, he stomped on the right foot of Nicolas Acevedo, who came in to contest the dribble. Referee Chris Penso initially handed Carlos a red card but was rescinded for a yellow after another VAR review.


In the 53rd minute, NYCFC’s threats led to a goal. With the midfield open, Thiago Andrade drove straight towards the goal. The Brazilian threaded a simple pass to Maximiliano Moralez, who coolly slotted the ball past Gallese to make it 1-1 once the defenders were drawn in.


With the pitch back in optimal condition, NYCFC’s possession-based style became dominant. Fullbacks Tinnerholm and Malte Amundsen started pushing forward, Talles Magno and Andrade looked more confident on the ball, and the reigning champions of the Major League Soccer started establishing themselves in the match.


The contest grew ever livelier into the final fifteen minutes as the two teams made a couple of substitutions each. From a cautious mentality, both sides adopted a more vertical and direct approach, with individuals given the freedom to create while relentlessly pressing when off the ball.


Fresh legs were effective during such moments, evidenced in the 80th minute when Orlando’s substitute Ivan Angulo burst away from the NYCFC defence before sending a cross to fellow substitute Kyle Smith whose volley went just slightly off target.


Angulo’s freshness was also crucial in defensive situations. Twice within the final five minutes, the Colombian locked down the left flank with a timely interception with one to break down a counter-attack.


Towards the final minutes, NYCFC tamed their attacking zeal and seemingly settled for a draw, especially with Moralez and Maxime Chanot booked for time-wasting. However, NYCFC ultimately let the single point slip out of their hands. In the sixth minute of added time, out of a total of five added, Angulo, delivered an inswinging left-sided corner right to the near post. Substitute Tesho Akindele dashed in and towered over Haak to head the ball towards the far post, much to the disappointment of NYCFC.


Orlando claimed a 2-1 victory in this heated matchup after this goal.


What’s next for both teams


With this victory, Orlando built a four-point gap from eighth-placed FC Cincinnati and, up next, they will play host to Seattle Sounders FC to conclude August.


While this defeat did not affect NYCFC’s standing, their gap with New York Red Bull remained just a single point while straying second-place Montreal Impact by four. On the final day of August, NYCFC will take on struggling D.C. United in hopes of catching the Canadian outfit.