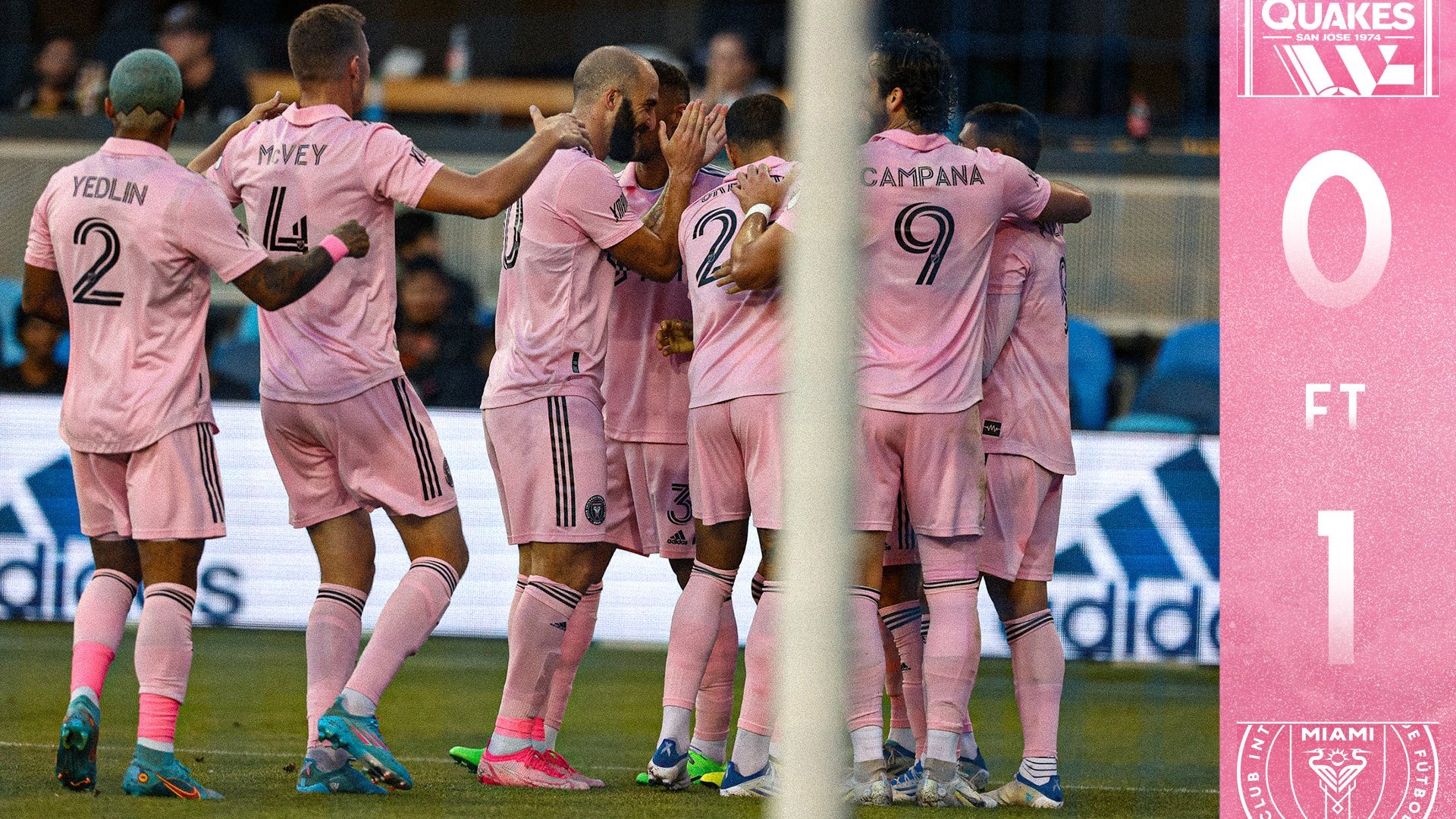 Miami sprung out of the blocks playing like a side infused with confidence, not one that has enjoyed just a single victory on the road all season, as they got to work on the San Jose defence in a historic first-ever encounter between the two teams.

Wave after wave of aggressive movement bewitched a San Jose defensive setup was breached as early as the 12th minute by a Brazilian moment of magic worthy of winning a game at the hollowed turf of the Maracanã Stadium in Rio de Janeiro.

The Quakes failed to clear their lines when a harmless cross floated into their box. A weak defensive header saw Mota pluck the ball out of the air before unleashing a sublime volley, gliding into the top corner from 26 yards.

JT Marcinkowski in the San Jose goal had no chance. Mota scored his first-ever MLS goal and only Inter Miami’s 5th on the road all season. The Brazilian often frustrates Miami supporters with his shoot-on-sight policy. Before his wonder strike, the samba star had taken 39 shots this season with just the seven on target.

Miami’s unfortunate Campana succumbed to injury in the 20th minute. The Miami star has had some rotten luck with knee injuries and was replaced by the speed merchant Lassiter.

It took until the half-hour mark for the Quakes to finally burst into life. Inspired by the intensity of Monteiro and buoyed on by some energetic pressing that forced Miami into a series of mistakes that presented San Jose with some almost moments and set-piece situations.

In recent away games, Neville’s men have often wilted either side of halftime, but their attack-minded-outfit survived the San Jose storm making it to halftime with their lead intact and denying the home side of a single shot on target.

The Quakes lost their goalkeeper JT Marcinkowski to a suspected concussion during the halftime break. His replacement Matt Bersano came on to finally make his long-awaited MLS debut as San Jose owner John Fisher watched on from the stands.

The second half was a free-flowing open affair with San Jose dominating possession and finally making Miami goalkeeper Drake Callender earn his wage as they had 20 plus efforts rain down on the Miami goal.

At the other end, Miami had some glorious opportunities to extend their lead. In the 50th minute, Higuaín squared a ball to substitute Lassiter in the box. His goal-bound effort looked destined for the net until a clearance off the line by a well-paced Tanner Beason saved San Jose.

The substitution of superstar Higuaín in the 72nd minute proved to be a pivotal moment in the contest. With San Jose in the ascendancy and growing in stature, it seemed a matter of when and not if the Earthquakes will equalise.

The Argentinian hotshot, who helped himself to a first-half hattrick last weekend in a high-octane 4-4 draw against a fast-evolving FC Cincinnati, was replaced by Colombian livewire Emerson Rodriguez who offered both energy and pace on the counter.

The speedster helped stem the Earthquakes’ tide. Although he missed some guilt-edged opportunities to put the game to bed, his influence will have certainly impressed Neville.

In the closing stages, the Herons gradually took back the Earthquakes' stranglehold on the game and escaped with a 1-0 win, moving them up to 8th place, a spot shy of the playoff line.

Before the MLS All-Star break, Miami continues their roadshow at Saputo Stadium to take on CF Montreal. They will be hoping for more of the same industry and speedy recoveries for Leo Campana (leg) and Gonzalo Higuain (jaw).

In the remaining 11 games, the depth of the Miami’s squad and their ability to unleash more offensive weapons than others will be crucial to securing a valuable playoff spot.

As for the Quakes, supporters and interim manager Alex Covelo hope the feisty Cristian Espinoza won't be added to the ever-growing transfer list before the MLS transfer window ends.

They travel to the Q2 Stadium to take on Austin, but in reality, their season is now about pride rather than playoff purpose.