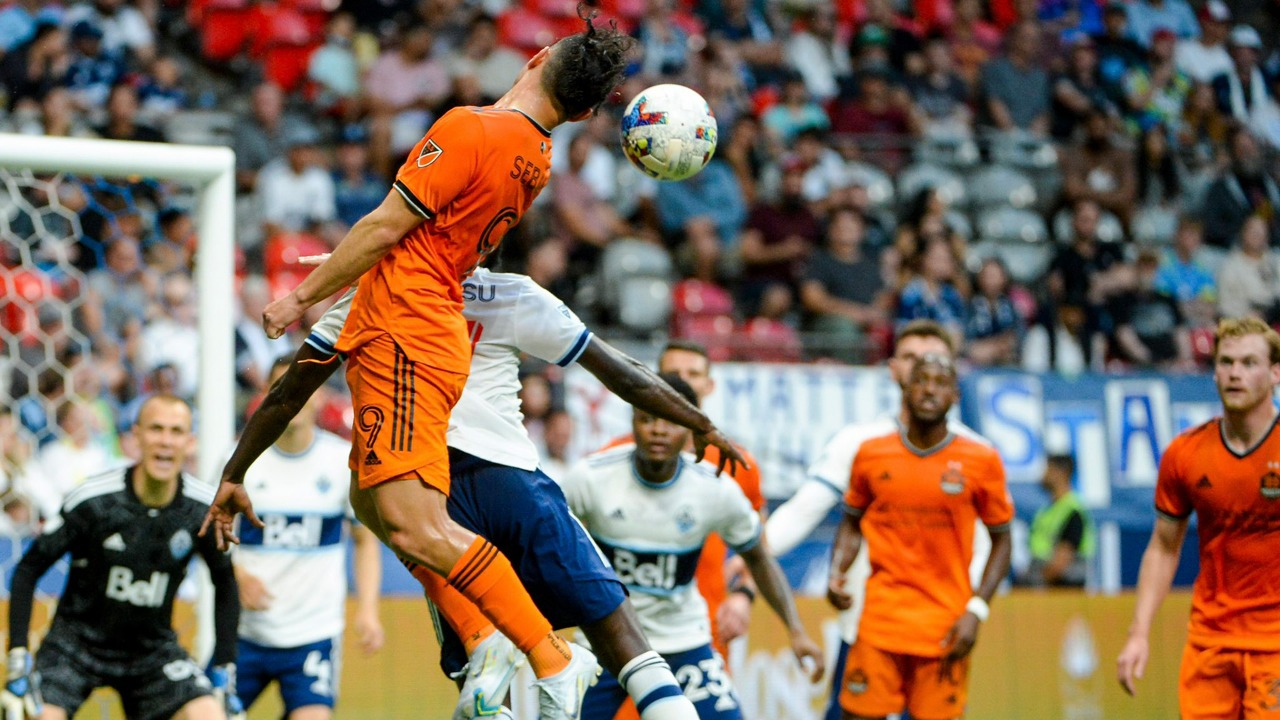 Vancouver Whitecaps pulled off perhaps the best comeback of the season against Houston Dynamo on Saturday night, with two late goals cancelling out an early Dynamo opener to secure a dramatic victory for Vanni Sartini’s men.


Despite falling behind after Fafa Picault's first-half goal, the Caps rallied late on through substitutes Simon Becher and Luca Cavallini in a pulsating finale to secure their first win in six MLS matches and sink El Naranja.


The game started brightly for the visitors, though, taking the lead inside just six minutes when the Caps failed to clear a Darwin Quintero corner with no conviction.


It was volleyed back in by Sam Junqua towards Picault, who had drifted in behind unmarked, making the faintest contact to ensure the ball dribbled into the corner of Cody Cropper’s goal.


The Caps were almost level soon after, as Ryan Raposo lifted an enticing ball towards the far post, but Julian Gressel could only steer his half-volley wide of the goal.


Down the other end, the Caps then had their goalkeeper to thank for keeping the score down to one as Quintero slipped in Picault down the left, but this time Cropper was equal to his effort to divert it behind for a corner.


Sartini decided to gamble first and brought on Lucas Cavallini for Pedro Vite just before the hour mark as the Canadian got straight into the action. But the former Nacional forward dragged Ryan Gauld’s cut-back wide of the target.


Then the visitors came closer to the second goal just minutes later with Quintero involved again, as the Colombian set Thorleifur Ulfarsson away down the right. The Icelander did well to chop inside and shoot on his left foot, but Cropper got enough to send the ball onto the post before grasping it from the goal line.


Straight down the other end, history repeated itself when Gressel again found himself unmarked at the back post, but he fired his effort straight into the midriff of Steve Clark.


Sartini decided to roll the dice once more in the 82nd minute as he brought Simon Becher on for last week’s hero Javain Brown, passing on the baton to the American for him to create his late show.


Just five minutes later, Jakob Nerwínski’s long ball was brought down by Gressel, who teed up Ali Ahmed to speed into the box and unleash a shot on goal.


It took a hefty deflection off Tim Parker to land perfectly at the feet of Becher, with the 23-year-old reacting quickest to side foot the ball home and bring his side level, but they were still unfinished.


In the second minute of added time, there was Deja Vu in the West stand as Houston failed to clear a corner, which was recycled by Ranko Veselinovic, who found Cavallini on the edge of the area.


While the 29-year-old had failed to impress during his cameo to that point, he continued to get into the right areas and was eventually rewarded - taking a touch to set himself before unleashing a fierce drive through Clark to complete the turnaround and spark pandemonium at BC Place.


The comeback puts Vancouver within three points of the play-offs and five clear of the Dynamo, with LA Galaxy next up.


Houston remains 12th and will host Montreal next in a bid to end a run of three matches without a win.