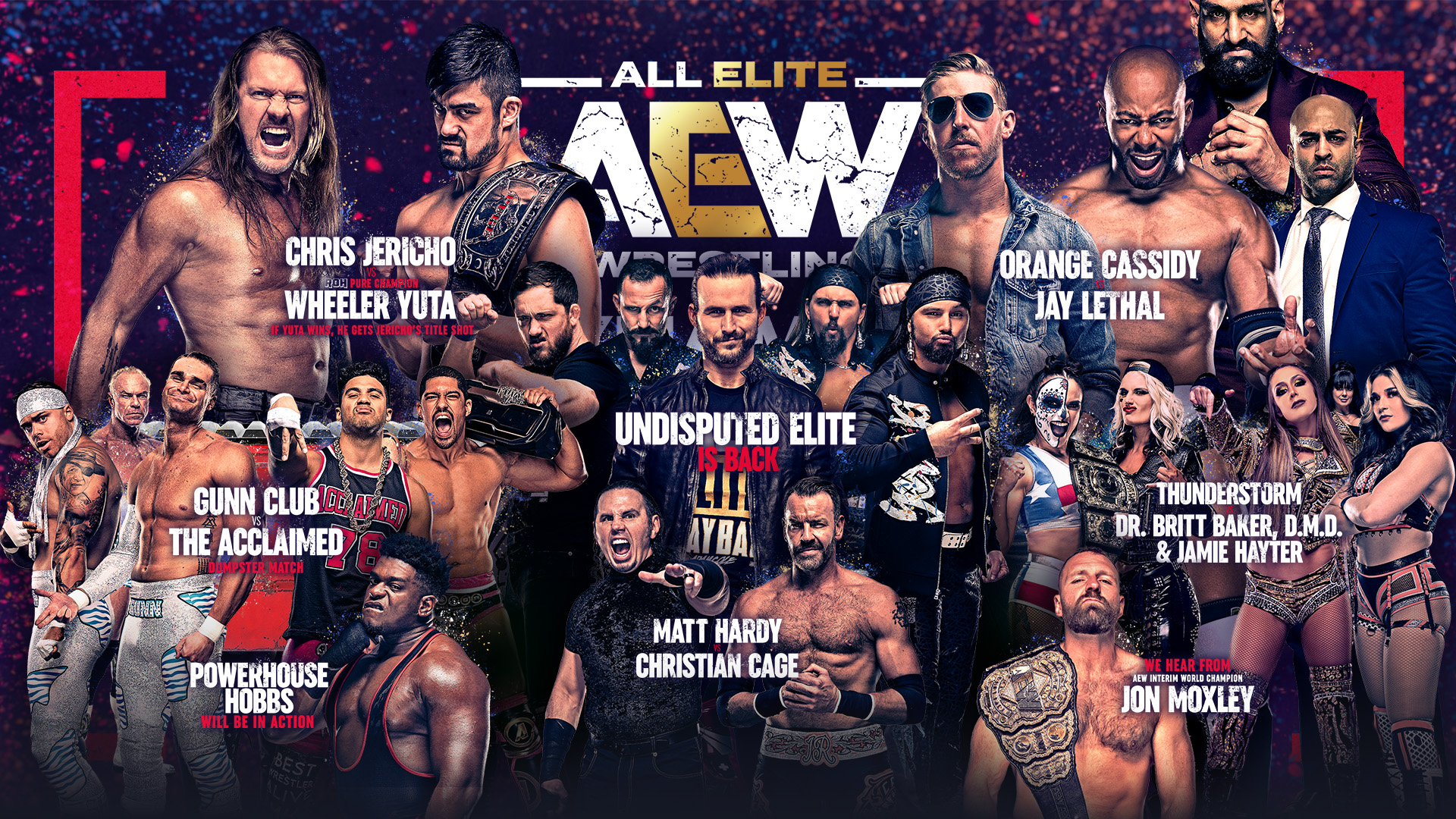 With another episode of AEW Dynamite, the slots are filling out fast for the All Out pay-per-view. However, for the upcoming Battle of the Belts show, we get a lot of extra matchups announced this week. So what happened when AEW kicked off in Columbus, Ohio, at the Schottenstein Center?

Four talented women put their bodies on the line for this hard-hitting contest that garnered ovations and "this is awesome" chants from the crowd of the Schottenstein Center- this match was an entertainer that the fans enjoyed the most.

From the start, all four women were in the ring, ready for action. The AEW women's champion gained control as she fled a Lockjaw attempt and countered it into a pinfall for a two count. Then she laid a few quick clotheslines that saw Hayter struggle early on. Hayter was isolated, and a few tags between Storm and Rosa made it even worse for her. But with a distraction, the momentum switched, and Hayter found her balance to land in a right hand. She then landed double knees in the corner and tagged in Baker.

After a few back and forths, Rosa got out of trouble by laying a stunner to Hayter. She made a hot tag to Storm, who came up with a high crossbody. As things look tricky for Hayter, she overpowers Rosa and Storm by reversing a double suplex into one of her own to put the duo down, setting up a Stomp from Baker. A quick pin attempt meets a double stomping save from Rosa flying out of nowhere, but that wasn't enough.

All four women would get up and tear each other to cause absolute carnage. Storm, with her running hip attacks, shifted the momentum. But a slight switch from Baker would see her hit Rosa by accident. That window of limited opportunity was all it took for Hayter to plant Baker with her signature clothesline for the pinfall.

Hayter emerged as a bonafide superstar after the match. The fans are excited to see a fresh challenger for the Battle of the Belts show. It will be interesting to see Hayter measuring up against the AEW Women’s World Champion, Thunder Rosa.

Can Rosa avenge her loss, or will Hayter prevail again?

Moment of the Night | Chris Jericho vs Wheeler Yuta

Jon Moxley wanted the "Lionheart" Chris Jericho to face him for the interim AEW World Championship. But before that could happen, Moxley's prodigy, the ROH Pure Champion Wheeler Yuta, stood as an obstacle. The stipulation was simple, whoever came out on top would be facing Moxley for the title.

The Jericho Appreciation Society comes out, and so does Claudio Castagnoli to even things up. The JAS tries to interfere and gets ejected early on. Yuta is impressive right off the start, and Jericho has trouble keeping the red-hot youngster checked. Jericho eats up a top rope clothesline and some German suplexes. But that was not enough to put away the veteran. Jericho surprisingly pulls himself up to lock into the Walls, but Yuta makes the rope.

Jericho complains and is distracted, and Yuta utilises this opportunity to chuck Jericho out and perform three consecutive suicide dives to the outside. Yuta shoves Jericho back into the ring and performs a top-rope dive, but it's still not enough as Jericho kicks out of it too. Frustrated, Yuta runs the ropes but gets locked into a double under-hook and transitions into a backbreaker. Jericho attempts a lionsault, but Yuta counters with double knees. The momentum shifts with Yuta, who climbs the top rope and dives, but again Jericho counters it with a Codebreaker. This time Yuta kicks out at two. Yuta is back up with a Regal Stretch to send Jericho to stoop low and grab his baseball bat.

Referee Aubrey Edwards snatches the foreign weapon out of Jericho's hand to throw it outside, but without her looking, he low blows Yuta. Still, Yuta managed to perform a roll-up, which is revered again by Jericho into his old Liontamer that we've not seen for years. There's no way Yuta had the experience to escape and continue from the brutal Liontamer. Jericho emerged as the victor but was unwilling to let Yuta off the submission when Moxley had to rush in to save his stablemate.

It was refreshing to see the classic version of Jericho back. We can't wait to see him challenge Moxley for the title.

Star of the Night | Max Caster

The Acclaimed were to face The Gunn Club in a Tag Team Dumpster Match, but that is not why Max Caster emerged as a bonafide star of the night. The Acclaimed’s pre-match stuff was just outstanding.

The Gunn Club came out first, accompanied by their father, Billy Gunn. To even the odds, the Acclaimed jumped them from behind and smashed Billy with a trash can and then drove him into the dumpster. Bowens was swift to complementary smash both Austin and Colten with a dumpster. Then Caster called for his music and did their entrance to the delight of the spectators. With an array of insults directed at their opponents, Caster pushed the boundaries when he claimed to make the Ass Boys retire like Vince McMahon.

It was the best line of the lot. The reaction it received was saying something of Caster's charisma on the mic.

Revelation of the Night | Adam Cole

Adam Cole comes out with his entourage of Bobby Fish, Kyle O’Reilly, Matt Jackson, and Nick Jackson. Cole announces that he isn't still medically cleared to compete. Then he goes on to talk about the Undisputed Elite and how all of them can still improve upon their success.

Cole talks about loyalty and the upcoming Trios Titles Tournament.

He expresses his disappointment with Matt and Nick as he desired the Undisputed Elite to compete in that tournament. However, with injury setbacks for both Cole and O’Reilly, the only option for the Young Bucks is to select Fish, which they are reluctant to do.

Cole says if they aren't choosing Fish to be their partner, they aren't going to be participating in the tournament as well. Both the brothers look perplexed at this claim, as does the audience. Cole quickly clarifies that he wasn’t using his words correctly and said they wouldn’t be physically capable to compete.

It doesn't take long to discover Adam Cole's ulterior motives. Kyle O’Reilly and Bobby Fish lunge at the Young Bucks from behind to lay them flat out. Yes, Adam Cole turns his back against the Undisputed Elite, eventually dissolving his short-lived partnership and reuniting with the reDRagon.

Surprise of the Night | Hangman to the rescue

Things escalate further, and the punishment continues as Adam Cole, Kyle O’Reilly, and Bobby Fish plot their next move in their planned assault on the Young Bucks.

They finally settled with the ploy of breaking off Matt's arm. Fish trapped the arm in a chair, and Cole climbed to the second rope. The audience half-heartedly expected a returning Kenny Omega to turn up and make the save, but it never materialised.

The save came from one of the unlikeliest frenemies, the former AEW World Heavyweight Champion, "Hangman" Adam Page. Hangman rushed to the ring with a lead pipe to fend off the trio.

People went crazy as they never expected to see the slim chances of reforming the fan favourite Hung Bucks. With the ring now cleared of danger, Page turned back to The Bucks and offered to lift Matt off his feet, and Matt didn't hesitate for an instant. But Page quickly turned around and left, leaving us wondering if the three would partner for the Trios Tournament as the Hung Bucks.