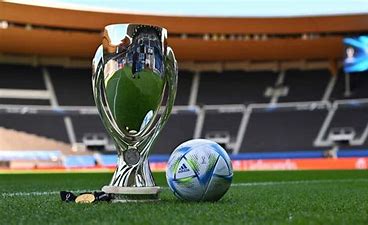 Real Madrid, the all-time UEFA Champions League champion from Spain, and Eintracht Frankfurt, the UEFA Europa League champion from Germany, will square off to open the European campaign. Real Madrid holds a record of 14 UEFA Champions League victories, while Eintracht Frankfurt has two UEFA Europa League victories to its credit.

As only two teams are challenging for the UEFA Super Cup Title, a team has to win either the Champions League or the Europa League to qualify. As of today, Spanish teams have dominated the Super Cup titles, a worthy cup to win, with combined 15 titles to their names.

As the 47th edition of the UEFA Super Cup title is hosted in Helsinki Olympic Stadium, Finland, let us look at the top 5 clubs with the most UEFA Super Cup Titles in history of this title.

Spanish side Atletico Madrid has won three UEFA Super Cup titles. They recently won the title in the season 2018-2019 against their bitter rivals Real Madrid in a derby. All the three times they won the Super Cup, it was through the Europa League. Their past wins were in the years 2010-11,2012-13, and 2018-19.

By winning the UEFA Super Club on four different occasions, they are the most successful English team in European Competition, along with winning the Champions League six times. Their recent win in the Super Cup came against domestic rival Chelsea FC in the 2019-2020 season while winning on penalties. The other three titles were in 1977-78, 2001-02, 2005-06.

The most decorated side in the history of the UEFA Champions League, with 14 titles, has won the UEFA Super Cup on only four occasions. However, they have a chance to make it title number five when they meet Eintracht Frankfurt in Finland for the curtain raiser to the European competition. The previous titles were in 2002-03, 2014-15, 2016-17, 2017-18.

There is a tie for the most successful clubs in the UEFA Super Cup competition. FC Barcelona is of the two teams that have won the Super Cup record five times. FC Barcelona is responsible for the side with the biggest contribution in the competition while firming the grip on the dominance of the Spanish sides in the competition. Although, their bitter rivals Real Madrid are on their tail to equalise the tally. Their latest win came in the highly successful 2015-16 season while winning in 1992-93, 1997-98, 2009-10, and 2011-12 in the past.

AC Milan is another club with five UEFA Super Cup Titles. The Italian side is the only Italian club on this list. They recently won the Italian league Serie A, their first title in almost ten years. It has been a decade since this Italian side won a European competition. Their success in the Super Cup came in 1989-90, 1990-91, 1994-95, 2003-04, 2007-08 seasons. On all five occasions, AC Milan qualified for the UEFA Super Cup as the Champions League winners.